Rowan has been nominated by parent Inga Scourfield for passing his Grade 4 drums with Trinity and Grade 5 electric guitar with Rock School, both with merit. Inga says that Rowan has made excellent progress and is currently working towards his Grade 5 Trinity Rock and Pop drums exam this year. “Rowan busked with his guitar in Hitchin to raise money for the local food bank,” says Inga. “He managed to raise £400 from busking. Here is an article about it in the local newspaper.”

During 2017 Rowan achieved his Bronze Arts Award for Songwriting. “Rowan writes songs about topics he feels strongly about,” adds Inga. “He wrote song following the Grenfell fire disaster. One of his closest friends’ dads was a firefighter at the disaster, which had a big impact on Rowan. He wrote the song and recorded it in his bedroom, playing the drums and guitar as well as singing the song. You can hear the recording of Rowan’s song here.”

Rowan says that passing his music exams has made him a more confident performer and has improved his technical skills: “It has also helped me to get more involved in playing music at school, since you can only take part in recital concerts and be in the band for school productions if you have passed music exams.”

Rowan’s advice to other Trinity students?
“Enjoy learning and practising the pieces and performing them at the exam.” 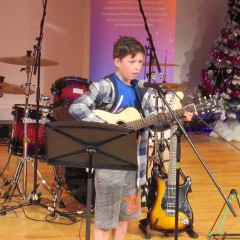