I went to the National Trust property Hartlebury castle to watch Quantum theatre’s production of Macbeth, a difficult play performed by a cast of five talented young actors.

I say it’s difficult because it’s a Shakespearian piece written in old English with a complicated plot that can often be hard to follow. In brief, a war hero Macbeth is told a prophecy by 3 witches that he shall be king, so his cunning wife and he kill the current King Duncan and take the throne. They’re haunted by what they’ve done, leading to the wife going crazy and killing herself, and Macduff – the son of King Duncan – pledging war on Macbeth and eventually killing him.

My first praise would definitely be the energy throughout the performance; one of the dangers of Shakespearian plays is that they can drag on and become a bore. This was certainly not the case as the cast were always very animated and lively. Based on my research, I think another reason for this may be because this company do a lot of shows at primary and secondary schools, and they’d have to have high energy levels to keep the children (and their short attention spans) engaged. Either way, it worked very well in this context too as there was never a dull moment.

Having said that, one of my biggest criticisms would have to be the vocal performances of the actors. Being set in Scotland, all the characters would realistically have Scottish accents. I wouldn’t have minded if they’d just not tried at all and spoke in English accents, but annoyingly only some of them spoke with Scottish accents; they all did at the start, but seemed to forget to as the play went on, and ended up with some weird mishmash of Scottish and English which was distracting and inconsistent. This combined with the fact that they were shouty and spoke very quickly in old English meant it was very hard to tell what they were saying. However, I will say that King Duncan (Hector McCormick) and Banquo (Hamish Somers) had great accents throughout, and actually Somers was very good at helping the audience understand him through the use of exaggerated gestures. In contrast Lady Macbeth (Ina Lark) was by far the worst and was practically incomprehensible.

Being such a small compan 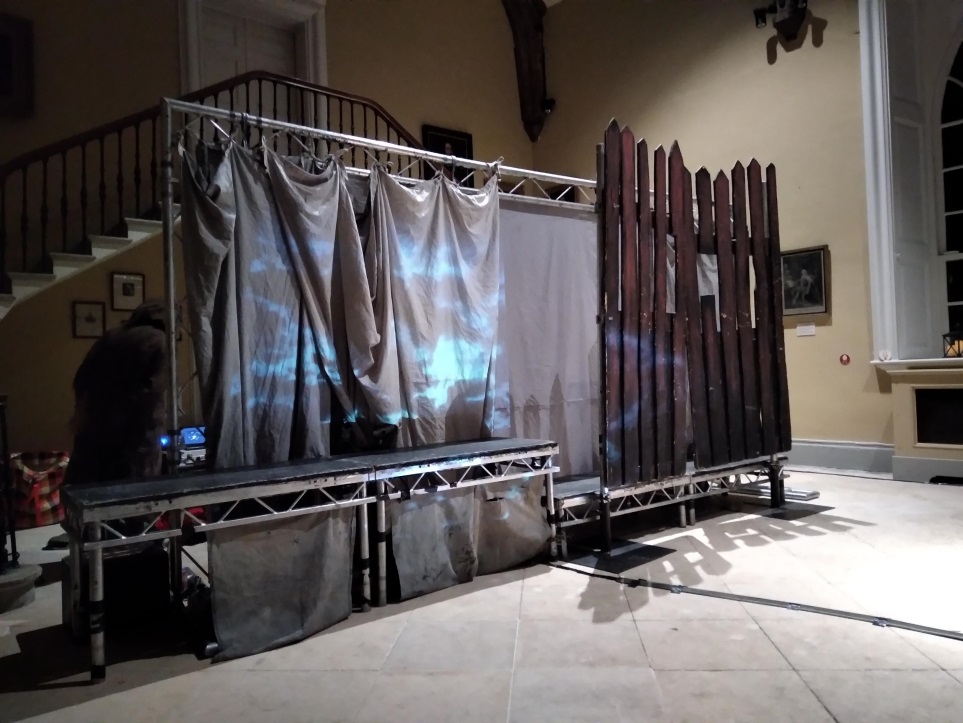 y that weren’t even performing in a theatre, I thought they did very well in terms of set. It was very simple and effective, as well as versatile in different scenes. They had a projector which would project images of the sky or battle clips between scenes which not only created stunning silhouettes when the actors were on stage, they also acted as transitions. Because of the small cast (which I assume was due to Covid at the time) these were used as quick change opportunities since all the actors were multi-rolling, resulting in very smooth and efficient switches. This multi-rolling meant they ended up playing some distinctly different characters too, for instance Ina Lark went from playing Lady Macbeth to Macduff’s son. As a cast, they were amazing at differentiating between the characters through compelling characterisation and body language. I know that this contrast between characters is due to their acting skills since the costume didn’t aid them in this sense in any way. Actually the costume was decidedly poor.

I can only assume that Jessica Selous, who was in charge of costume, was working on a small budget. Their outfits were within period and looked reasonably realistic, apart from the fact that they were all wearing trainers. This was a bit off-putting, and frankly just confusing considering the context of the play. My guess is that because we were all sitting on the same level (no elevated seating as you go back), she thought it wouldn’t matter too much as only the first few rows would see their feet: sitting on the front row, this is something I did noticed.

Conversely, this was overshadowed by some great and memorable acting moments in the play. I really enjoyed the “Is this a dagger I see before me” monologue by Macbeth (William Huke), a very convincing performance that truly made me believe he was losing his mind, captivating to watch. Another particularly tense and thrilling moment was when Macbeth kills Duncan. The tension building up to the death was created via the constant movement of the cast to and fro across the stage (circling back to their high energy levels), the apprehensive music, and fake blood, all making for a high pressure atmosphere which made my heart skip a beat on the final stab.

In conclusion, I thought that other than their generally awful accents the cast really carried this show, but the reason I only give it 3 stars is because the tech, costume and set side was a bit too “minimalist” for me. I know this is probably due to a low budget but it really did let the sides down. I would recommend this piece to students studying Macbeth since they do make it relatively easy to follow, but not as a piece to watch for any other reason; I would describe it as a show with potential.