Hey Leo! Tell us about your Trinity College qualifications.

Acting and musical theatre. I also know how to play the drums, performed in a West End show at Her Majesty’s Theatre called Trouble’s A Brewin' and played a female character called Old Lady Custard.

What was your experience of taking exams?

My experience of taking Trinity exams has been very exciting and also quite educating. It has expanded my knowledge of acting techniques. Also, because I love acting, it didn’t feel like an exam.

In what ways do you feel like your creative talent has progressed?

Initially, when I joined the Pauline Quirke Academy (PQA), I knew people found me funny – and I could do accents – but I did not imagine I could be an actor for a living. Attending the academy every week, learning with my teachers and other students, and receiving their feedback, has made me feel more confident.

It has also helped me understand that I am only at the beginning of my journey and that there is still a lot more to learn.  However, a year ago, I would have never thought I would have performed on a West End stage like I did.

In terms of Trinity, what has been the most valuable to you personally?

The thing that has been most powerful to me has been saying, “I’ve done this!” I have impressed myself, let alone others! I would also say, my new friendships. I love everyone at PQA, and all the staff there have made me confident and pushed me to do great things.

People telling me I am good at acting has inspired me to carry on, wanting to do well. Passing both exams with Distinction made me feel great inside.

What I found most challenging was the improvisation. I feel like I can do it, but it doesn’t feel natural to me. I don’t really like not knowing what could happen and prefer to have a script. I am improving, though!

What are you going to do next – and has your qualification helped you?

I am doing the PQA summer school. In a couple of years, I would love to do some classes at RADA. I have recently done an agency audition, so hopefully I will get something from that. Fingers crossed!

How you got involved with music or drama in the first place?

People have always told me I was good at making others laugh. I was not sure I was talented enough, but I knew I liked acting. I found out about PQA and enrolled. Once I started, I soon realised that I loved it and it will forever be my passion!

Louise and the team at PQA, Welwyn Garden City, have been very supportive, kind and have always been honest with me. My lovely family and friends, also!

I have many actors who inspire me, but the one that first comes to mind is Tom Cruise. He has a great sense of humour, is fearless and I would love to be as successful as him – or even more so!

What projects do you have on the go at the moment?

In my English class at school, we are learning Shakespeare and other great playwrights. Also, last year I became a finalist in the PQA Monologue competition, which involved me going to a workshop in London and meeting the Director of the West End show Matilda.

In five years, I will hopefully be a working actor or studying to go to the university I want.

What advice would you give others looking to take the same qualification as you?

I would advise others not to worry and to have fun! It doesn’t always rely on talent, sometimes creativity as well!

Where can people find out more about your creative work?

Google me in a few years! Haha, just joking. 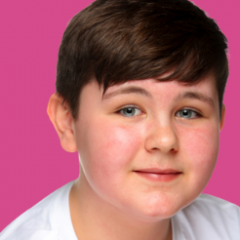