Kitty, who passed her Grade 2 Group Drama and Musical Theatre Production, talks about her journey from the Pauline Quirke Academy to Her Majesty's Theatre

My name is Kitty Dee Farrell. In July 2018, I gained a Grade 2 Group Drama (Devised) qualification and in February 2019, a Grade 2 Musical Theatre in Production qualification.

I’ve come a long way since being part of Pauline Quirke Academy of Performing Arts (PQA), Welwyn Garden City. I have become more confident as an artist. I have learnt many new techniques for my singing, dancing and acting.

I have attended dance classes since I was five, won a talent show at school and been part of local production. From there, I decided I wanted to commit to a drama school that could educate me further.

I was excited and confident about doing my first exam, as we had prepared well. However, it was a challenge because we had to interpret things with our emotions. The second exam took place while performing at Her Majesty’s Theatre, without me being aware.It was a surprise to us all when we were told but amazing when I found out I had passed with Distinction.

My feelings about doing a Trinity College Qualification are that my friends and I had a great time performing and that it was satisfying to see my hard work had paid off. The most challenging part was when we had to interpret relevant transitions.

Both my teachers and friends at PQA have helped and inspired me along the way. I am on Quirky Kidz’ books, and they have many self-tapes of me singing various Musical Theatre songs and delivering the odd monologue.

I often feel nervous before getting on stage, but once I’m actually performing, I feel that it’s what I am meant to do. The nerves disappear, and I feel happy that I can deliver a great show. I love it!

I will continue with PQA, studying music and drama at secondary school and hope to continue studying drama at University level. One day, I hope to have the opportunity to get a part in a well-known London play or musical. 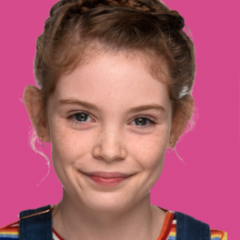 Kitty, who passed her Grade 2 Group Drama and Musical Theatre Production, talks about her journey from the Pauline Quirke Academy to Her Majesty's Theatre