Cameron Vargesson remained connected to the performing arts through his Musical Theatre exams, and is now applying to university courses with a dream of a job in the West End.

Cameron has always had a passion for theatre. At just five years old his Mum took him to a class to try it out and he never looked back. Now, his love and commitment to the craft is such that he attends dance and musical theatre lessons at the Aberdeen Academy of Performing Arts after school on Wednesdays and Thursdays. He also assists there on Friday evening and all day on Saturday.

Cameron has undertaken Trinity Musical Theatre (solo) exams at Grades 4,5 and 6. For Grade 7, the exam he most recently achieved, Cameron worked largely with his singing teacher Alisdair Sneden and his acting teacher Sali Kindley. He is now working on Grade 8 while applying for places at university to take his passion to the next level. He ultimately hopes to one day be in a production at the West End – ideally either Top Hat or Singing in the Rain.

The versatility of Musical Theatre is such that Cameron is also able to consider a career in film, noting that:

‘On stage, there’s more of a bigger persona required, and more projection – everything is bigger, especially in the face. On film it can be more pulled back and natural.’

His first Musical Theatre exam was at just eight years old, and nearly a decade later he is able to look back and reflect on how enriching the experience has been for him.

If you’re thinking about a career in performance, Trinity College London’s Music Theatre qualifications might be just what you’re looking for!

Follow the link below to read more of Cameron’s story, and to see his top tips for getting started with the qualification. 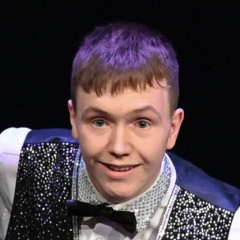 Cameron Vargesson remained connected to the performing arts through his Musical Theatre exams, and is now applying to university courses with a dream of a job in the West End.