Voice MagReviewsReview: In Every Mir…

In Every Mirror She’s Black is a searing debut that explores classicism, sexism, racism, and the fetishization of black bodies.

Lola Akinmade Akerstrom is a Nigerian-American based in Sweden. She is an award-winning speaker and photographer whose work has appeared in the likes of National Geographic and BBC. Her debut novel, In Every Mirror She’s Black, follows the lives of three black women: Kemi, Brittany-Rae, and Muna. At first, our three protagonists seem to have nothing in common. However, we soon discover that their lives are tied together by Jonny Vun Lundin, a white and privileged member of Sweden’s upper class. As the novel progresses, Akerstrom exposes a multitude of issues that exist within Swedish society, from classicism to the fetishization of black women.

It is hard to believe that In Every Mirror She’s Black is a debut novel, so excellent is Akerstrom’s writing. Often, when a book features multiple protagonists, the characters feel two-dimensional, the details of their lives skimmed over. However, Akerstrom has done a superb job of creating three highly developed protagonists, all of whom serve a distinct purpose in the novel. Kemi, like her creator, is Nigerian-American. Through her character, Akerstrom explores the nuances of navigating the world as a black woman in different cultures. By drawing on her own experiences of living in Nigeria, America, and Sweden, Akerstrom creates a character who feels deeply realistic. Meanwhile, Brittany stands as a physical metaphor for the ‘acceptable’ black woman. Where Kemi is ambitious, Brittany is content as Jonny’s housewife. Similarly, Muna, a Somali refugee, also feels incredibly realistic as her character was inspired by Akerstrom’s visits to Swedish asylum centres. Through Muna, Akerstrom gives voice to refugees, exposing Sweden’s harsh treatment of foreigners.

Furthermore, having three protagonists in the novel works extremely well. By choosing to focus her attention on more than one character, Akerstrom highlights the fact that the experiences of black women are not singular or homogeneous. Akerstrom’s diverse range of characters also allows her to examine what it means to be a black woman in Sweden from the perspective of three women from three very different backgrounds and social classes. As a successful marketing executive, Kemi’s life is far different from Muna’s, yet both women experience similar forms of prejudice in Sweden. No matter their success, neither Kemi, Brittany, nor Muna are ever truly accepted by Swedish society. As the title suggests, their lives are continually dictated by their skin colour.

In Every Mirror She’s Black delivers an emotional punch that will stay with readers for a long time.

In Every Mirror She’s Black will be available to purchase from 28 October. 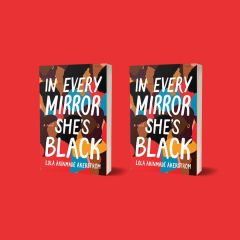 Review: In Every Mirror She’s Black by Lola Akinmade Akerstrom

In Every Mirror She’s Black is a searing debut that explores classicism, sexism, racism, and the fetishization of black bodies.