Iron Widow is a dazzling blend of Chinese history, myth and mecha sci-fi.

Iron Widow is Xiran Jay Zhao’s (they/them) debut novel and the first book in a duology. Zhao’s stunning new work of YA fiction is a reimagining of China’s one and only female emperor Wu Zeitan. In the mythical world of Huaxia, boys are reared to pilot Chrysalises (giant transforming robots), whose purpose is to battle Hunduns (legendary faceless beings from Chinese mythology). The novel follows eighteen-year-old Zetian, who offers herself up as a female co-pilot to avenge her sister’s death. In Huaxia, female co-pilots are expected to serve as concubines, sacrificing themselves for their people while the male pilots drain them of their life like a battery. However, Zetian has plans to overthrow the entire patriarchal military system.

The characters in this novel are truly spectacular. Our protagonist Zetian is powerful and bold in the most inspiring way, and her male counterparts Li Shimin and Yizhi, are equally entertaining. What is most amazing about these characters, though, is their bond. Zhao overthrows conventions, choosing for their characters to be in a polyamorous relationship – something many authors avoid for fear of backlash. Interestingly, the relationship between Zetian, Li Shimin and Yizhi is key to the development of the plot. Without giving too much away, their love for each other gives them power both metaphorically and literally.

Additionally, Zhao’s exploration of feminism in Iron Widow makes for a compulsive read. In the novel, misogyny is embodied by most of the male authority figures who classify women as second-class citizens, wholly inferior to themselves. Although the novel is set in the future, many of the misogynistic traditions, such as foot-binding, are borrowed from Chinese history. Foot binding is an ancient Chinese practice whereby the feet of young girls would be bound tightly to prevent them from growing. But, as Zhao reveals, this practice was about more than aesthetics. A girl with bound feet would be incapacitated, unable to move without the assistance of a man. In the novel, it is empowering to witness the way in which Zetian utilises her disfigured body to overthrow the patriarchy and destroy gender norms.

Described by the publisher as ‘The Handmaids Tale meets Pacific Rim’, this debut definitely does not disappoint.

Iron Widow will be available to purchase from 7 October. 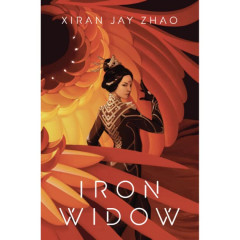 Iron Widow is a dazzling blend of Chinese history, myth and mecha sci-fi.