Against The Loveless World is an impactful and haunting story of love, friendship, survival and trauma.

Susan Abulwaha is a writer and human rights activist. She is the founder of Playgrounds For Palestine, an organisation dedicated to protecting The Right to Play for Palestinian children. Her latest novel, Against The Loveless World, follows political prisoner Nahr. Nahr is confined to the Cube, a new form of solitary confinement devised by Israel. From her nine square meters of cinderblock, Nahr reflects on her life as a Palestinian refugee growing up in Kuwait, Jordan and Palestine. Throughout her confinement, Nahr is kept strong by the memory of her husband Bilal, who may not even be alive, but who is her reason to endure imprisonment.

Although the characters’ lives have been ravaged by tragedy, they find small ounces of joy in each other’s company as they lift up one another in a beautiful display of female camaraderie. In this sense, Abulwaha offers her readers a sense of hope, despite the novel’s heartbreaking subject matter. Nahr and Um Baraq, for example, protect one another from danger until the very end. Their unwavering loyalty to each other makes for a model friendship that is beautiful to watch unfold. Likewise, it is most enjoyable to read about Nahr’s relationship with her grandmother Sitti Wasfiyeh. Their relationship is rocky, but it soon strengthens as Sitti Wasfiyeh becomes the bearer of laughter, brightening up even the darkest of situations with her amusing mannerisms.

But, it is Nahr’s character development that really makes the novel shine. Nahr is a determined, strong and truly admirable female protagonist. Watching her develop from a young, naive girl into a bold, headstrong young woman is inspiring. Perhaps one of the novel’s most memorable quotes is this: ‘I colonized the colonizer’s space of authority’. Even here, where Nahr is shackled before a judge in the Israeli court, she remains resilient. Instead of cowering in fear, Nahr loudly sings the lyrics to Palestinian pop songs, flaunting her cultural identity one last time. For this reason, both Nahr and the novel are unforgettable.

Against The Loveless World is a timely novel, expertly written, which will tug at your heartstrings. 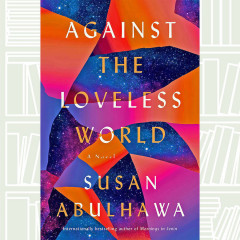 Review: Against The Loveless World by Susan Abulwaha

Against The Loveless World is an impactful and haunting story of love, friendship, survival and trauma.