A tough watch but potentially a worthwhile one, Idriss Assoumanou’s short film follows a man falling down the slippery slope of right-wing ideology.

Patriot, a short film from director Idriss Assoumanou and writer AR Ugas, tells the story of a man with dreams of joining his local far-right terrorist group and the grim realities of what his dream will cost him.

Right off the bat, unsurprisingly, he’s not a sympathetic character. I have a – perhaps unfair – habit of losing interest in film or art that asks me to give time out of my day to characters that I feel are undeserving of sympathy but then I suppose you’ll learn nothing that way. Art, just like life, is often greyer than that.

Patriot in some ways is concerned with that grey area. (Although it does feature some bordering-on-cartoonish portrayals of evil, though that cartoonish element may be down to slightly hammy acting.) That same unsympathetic main character I mentioned earlier, over the course of the film, doesn’t necessarily become sympathetic but does become more human, for want of a better word, and is shown to have the opportunity to become someone you could one day sympathise with.

However, I’m still left with that feeling of ‘why’, feeling somewhat irritated at being asked to (in a way) interact with someone like this. But then, maybe that’s because I’m not of the demographic that needs to see this film. Perhaps this film could be an important watch for someone who might start this film with a certain level of sympathy for its lead, someone who might not agree with him but might understand him.

What Patriot seems to be concerned with is the fact that far-right ideologies and the groups that peddle them are slippery slopes and are looking to sweep up and indoctrinate disillusioned people, often young men. It depicts that crux moment before you fall down the slope for good, something that’s not always as obvious and affecting as in the film. You would hope that, for some people watching, this film could be their crux moment, and it would seem that this is the film’s intention.

For that, I applaud the filmmakers’ ability. I think they have conveyed their message with skill. The film is an uncomfortable watch but ultimately may manage to persuade a large percentage of its audience, rather than alienate. In general, it feels like a well-made piece too. The camera work and cinematography are well-executed, and the writing manages to fit its 22 minutes run time fairly well, not feeling too rushed whilst covering a significant amount of action.

Unfortunately, I feel it’s let down by much of its acting. There is a sense that everyone is acting as if they are in a film, rather than just acting. It comes across somewhat clumsy and unoriginal because of this, although there are directorial and writing choices that I feel add to this too. A scene featuring the English flag being used to plug a wound is almost unbearably on the nose, and much of the final sequence feels incredibly clichéd.

Despite these let downs, and especially trying to ignore my own biased film-making preferences, Patriot still manages to engage and hopefully persuade, and is definitely worth a watch if you’re a little too attached to the English flag. 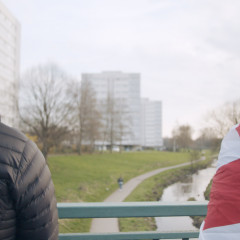 A tough watch but potentially a worthwhile one, Idriss Assoumanou’s short film follows a man falling down the slippery slope of right-wing ideology.