Voice MagReviewsReview: As Good As D…

As Good As Dead is a highly addictive YA Thriller about a small English town and its web of secrets.

As Good As Dead by Holly Jackson is the third and final book in the New York Times bestselling series A Good Girl’s Guide to Murder. The final instalment in the series begins with a mentally troubled Pip who has been left traumatised by her last investigation, covered in book two of the trilogy. Although Pip is soon to leave behind her home in Little Kilton to study at Cambridge University, she finds herself immersed in a new murder case to feature in season three of her true-crime podcast. But this case is different. This time, it’s about Pip. Pip has a stalker, one who has branded her a ‘dead girl walking’, and she needs to find them before they find her.

As Good As Dead perfectly rounds off the A Good Girl’s Guide to Murder series by bringing together the whole cast of characters from books one and two, as they all band together to help Pip with her investigation. Jackson also reintroduces mysteries from the first two books here, undoing all that we previously we thought we knew about the Andie Bell murder case. This interesting twist makes it feel as though the story has satisfyingly come full circle. Additionally, despite As Good As Dead being over five hundred pages long, Jackson’s writing is fast-paced throughout. The mystery is cleverly plotted and thoughtfully planned so that you are kept on the edge of your seat for the entirety of the novel. Readers will also appreciate the research Jackson has conducted to make the murder case in this book forensically accurate. Jackson’s research makes As Good As Dead feel realistic, as opposed to far-fetched.

As is usual with Jackson’s first two books though, the characters are what really makes As Good As Dead shine. Pip is extremely likeable, and Jackson has done a fantastic job of bringing her to life. As we already know from books one and two, Pip is witty and intelligent, but this final instalment to the series shows us a whole other side to her character. In this book, Pip’s vulnerabilities are exposed, showing us a Pip who is very different to the confident, fearless girl we thought she was.

As sad as it is that the series has now come to a conclusion, As Good As Dead is a gobsmacking series finale, compulsive from beginning to end. 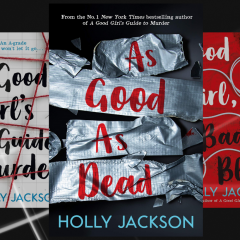 Review: As Good As Dead by Holly Jackson

As Good As Dead is a highly addictive YA Thriller about a small English town and its web of secrets.