Mabel Thomas’ one-woman show is as compelling as it is disquieting.

SUGAR feels at first – and I mean this in the nicest way possible – like you just accidentally sat down next to someone a little too chatty on a long bus journey and now there’s no free seats and you’re going to be on the bus for an hour and they’ve decided they’re going to tell you their life story and you’re just going to have to listen.

At first this feeling stays with me, and I feel a little uncomfortable and a little put off, but as the minutes go by, I can’t help but get caught up and swept along in the story woven by Mae (played by writer and co-director Mabel Thomas). It begins with tales of her childhood that paint her as vindictive, conniving, boy-hating, and thoroughly goal-orientated – which is how every young girl should be.

The performance tracks through various moments of Mae’s life, each more engaging – and excruciating – than the last. I wondered if the show might have lost something being performed digitally rather than live (as it was intended) but excellent camerawork and direction by both Thomas and co-director Ciara Crolly ensures that this isn’t the case, perhaps even enhancing the performance.

Close-up shots trained on Thomas at times garner empathy or unease – sometimes both. The use of jump cuts and asides to camera really hits gold during a scene depicting Mae trying to establish whether or not the girl she’s flirting with is gay. (Showing my hand here but) the portrayal of Mae exploring her sexuality is when the comedy element of SUGAR really hits for me, the ‘Australian lesbian hunting’ segment especially is as relatable as it is sheer daft.

Thomas’ performance is incredibly engaging, conveying moments that feel on the verge of cartoonish in her earnest and almost overblown style, but always underpinned by a grim wit and cynicism, in line with a script that covers increasingly more uneasy topics. Now seems like as good a time as any to give a content warning of descriptions of sexual assault to anyone who gets a chance to watch this show.

It’s this handling of more serious issues that wins me over for good. The discomfort and hurt portrayed by Thomas is sharp and intense, and near unbearable to watch. It’s a shock to the system but an unfortunately familiar one. Not only does SUGAR depict these horrifying moments, but it also captures the horrifying mundanity of them, and the petrified helplessness we feel in the face of this. But most familiar of all is the absurdity and comedy Thomas has still managed to convey in the wake of these events, shocking a laugh out of me seconds after I was shaking with some kind of hopeless rage.

I still feel like I sat next to someone a little too chatty on a long bus journey but now, I’m glad I did.

More information about SUGAR is available here. You can keep up with Mabel Thomas’ work here. 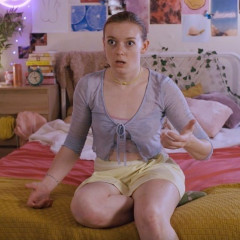 Mabel Thomas’ one-woman show is as compelling as it is disquieting.