Listen to Love Beyond the Zoo here.

From award-winning writer Tom Powell, as part of the New Creatives initiative, Love Beyond the Zoo is an audio-narrative that has zero qualms about presenting its absurd premise with a deadpan, matter-of-fact voice. This choice of voice is utterly fascinating, and completely essential to the enjoyment of the 11-minute piece. It gives the impression that Powell had faith that his work could speak for itself without much dressing up. As it turns out, this faith was entirely justified.

It makes full use of its medium. The ambience in the zoo, at the nightclub or on the beach is expertly rendered to centre the listener in a location, freeing them to engage with the narrative’s voice. The sound effects are also well-utilised, drawing the listener’s attention to significant details.

The voice-acting is the highlight of the sound design. Perfectly balanced with the background noises, the voice actors (Tom Powell as the man, Saffron Coomber as Molly the Elephant) deliver on-point performances that gel with the work’s singular tone.

The entire narrative is defined by its tone. To call something surreal is all well and good, but what does that actually mean in this specific context? It is the blending of emotion, the splicing of dissonant ideas. A love story with a kids-show concept that is actually a playfully twisted and poetic-macabre horror story in the same vein as Eugène Ionesco’s Rhinoceros, except more disturbing because the protagonist’s regression to an animalistic state is self-afflicted and ultimately accepted by him. It is overtly comedic at several points, but the feelings it evokes are those of pity and mild disgust.

This is writing that challenges its listener. It is eclectic, both defying definition and taking a risk with the confidence that it will pay off.

We also interviewed Tom Powell about the process of creating such an interesting piece. You can read that interview here. 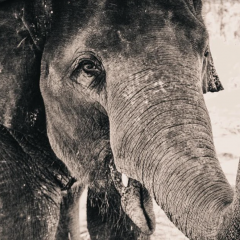 Review: Love Beyond the Zoo