White Smoke is a nail-biting YA psychological thriller and a modern take on the classic haunted house story.

Tiffany D. Jackson is the New York Times bestselling author of Allegedly, Monday’s Not Coming, Let Me Hear a Rhyme, and Grown. White Smoke is Jackson’s latest novel and her first foray into the horror genre. The novel follows Marigold, who is relocating with her blended family to Cedarville. But, Cedarville might not be the fresh start she and her family are looking for. Their newly renovated home has secrets, and Cedarville does too. Footsteps can be heard at night, items mysteriously vanish, doors open on their own accord, and Marigold’s step-sister Piper has made a new imaginary friend who wants Marigold out of the house.

White Smoke is extremely well-written, and Jackson builds up the perfect amount of angst to keep you on the edge of your seat for the entirety of the novel. The twists and turns as Marigold attempts to unravel Cedarville’s secrets make for a fast-paced and unpredictable story. However, the unpredictable nature of the final twist means that the novel feels unfinished. Instead of providing her readers with a satisfying ending, Jackson creates further ambiguity. Nonetheless, the novel is very atmospheric. Jackson’s descriptions of the strange goings-on in Cedarville make for a chilling read, and each of her characters are well-developed. Marigold, for example, is a deeply realistic and complex character as she suffers from addiction and anxiety.

However, the standout quality of the novel is the fact that it is much more than just a ghost story. Using the backdrop of a haunted house, Jackson explores gentrification and the wiping out of black communities. The novel was inspired by Jackson’s trip to Detroit, where she witnessed entire blocks of houses completely abandoned. This prompted Jackson to research a festivity called Devil’s Night. In the 1960s-1990s, on Devil’s Night (30 October), youths would commit minor pranks and acts of vandalism for their own entertainment. However, these seemingly innocent pranks soon escalated to arson as youths became more daring. In White Smoke, Jackson plays with the idea of Devil’s Night as arson becomes part of a ploy to rid Cedarville of its black residents by means of destroying their homes.

Described by HarperCollins as ‘Get Out meets The Haunting of Hill House’, White Smoke revolutionises the classic haunted house story.

White Smoke will be available to purchase from 30 September. 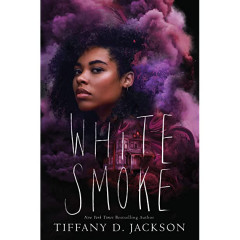 White Smoke is a nail-biting YA psychological thriller and a modern take on the classic haunted house story.