Deeply personal and conscious of its own format, Farah’s Ellipsis opens up the symbiotic relationship between audience and comic in this stand-up show that uses her own experiences to criticise British society’s grief culture

Farah begins her show in the usual stand-up way. She comes out on stage to a round of applause and dim lighting, takes the mic, and introduces herself whilst incorporating several quickfire jokes to get the audience on her side. It ceases to be a standard stand-up gig when she puts the mic away, the lighting brightens up to a more natural level, and she starts explaining the thought process behind her introduction. She introduces the ‘levels’ of a comic. Level one comedians can only joke about universal biographical things: ethnicity, relationship status, profession, whereas level five comedians can bring in material that covers more complex issues, like death and deep-seated personal emotions.

This format, of jumping between an on-stage persona to a more authentic, introspective representation of her feelings, is as effective as it is original. It is certainly more accurate to call this a self-exploration performance rather than a stand-up show. Watching her talk through the narrative of her grief enriched the show’s significance and left a lasting impression, but also meant that every time she returned to stand-up, it felt more like she was putting on a facade. This had a negative impact on the humour, although this was likely a deliberate choice made to further emphasise the function of comedy for the comedian as a way to talk through one’s own issues.

Moments like her recounting of the times her therapist caught her masking her pain with humour, or when she listened to a person talk to her about the loss of their loved one and thought to herself ‘I am hearing my grief described to me by someone else’, hit home as a discussion of the universality of grief and Britain’s poor cultural treatment of it — the idea that we should keep calm and carry on. Farah has delicately chosen concrete details of her grieving process that allow her to capture the experience and present it to others, an immensely impressive achievement of empathy and self-awareness.

As far as genuine criticisms go, the only distracting aspect of her performance was a penchant for tripping over lines. This was not a constantly occurring issue, but it happened enough times to be noticeable. It is a minor issue, made up for by the obvious attention and care given to the script and the performance as a unified whole. The staging, content and format all demonstrate a deep desire to tell her story, and tell it well — something she undoubtedly accomplishes.

Isabelle Farah’s Ellipsis tackles issues that even level four comedians would struggle with, she presents the ebb and flow of strong emotions that dot the mourning process and delivers on an ambitious format that channels artistic spirit and unflinching vulnerability. 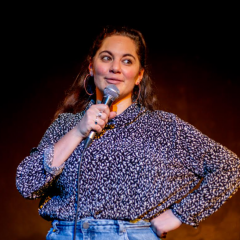 Deeply personal and conscious of its own format, Farah’s Ellipsis opens up the symbiotic relationship between audience and comic in this stand-up show that uses her own experiences to criticise British society’s grief culture