Janine Harrington’s dance piece hypnotizes and entrances in a homage to screensaver programmes.

Screensaver Series is a dance and sound piece, choreographed and in part performed by artist Janine Harrington, with sound coding by Jamie Forth. The piece is inspired by the screensaver programmes that once adorned our computer screens when left idle, and seems to at once echo and subvert the visuals and connotations of this source.

There is a reassuring familiarity to the movement and the costume design, all performed by 5 dancers including Harrington. Their clothes bear a variety of patterns, almost clashing, in a variety of colours, some bright, some muted, and all seeming to reference 80s or 90s fashions – retro like screensaver programmes themselves. Their movements are fluid and continuous, expanding, shrinking, and interlinking. There is the comforting feeling of watching something natural or organic, an insect spreading its wings or a stream meandering, which could be at odds with the programmes the movements reference. But then these programmes themselves seem to echo nature, and therefore there is the interesting sense of nature mimicking machine mimicking nature.

This intersection between the natural and unnatural is enhanced by the multiple camera angles – set in place of the multiple perspectives that a live audience would experience – which allow the viewer to at first see a seemingly impossible kaleidoscope of limbs and then, from a side angle, the individual cogs or cells that power it.

The piece is hypnotic, the dancers seeming to ingest and then digest each other, there is even a sense of gestation and birth as they move into, out of, and over each other. Alternatively or simultaneously, they could be considered as data or commands, input and processed in the creation of a final resolved organism. Every movement looks as if it were guiding and informing the next, seeming almost unrehearsed.

The already captivating performance is enhanced by Jamie Forth’s sound work, ambient and at times almost foreboding, seeming to add narrative to the repetitive quality present in the choreography. The sound most evokes computer hum, rumbling and faintly buzzing, but other elements seem to materialize throughout the piece – an alarm, a heartbeat, footsteps in an alleyway, a motorbike engine, wind rushing.

The piece as a whole is wonderfully otherworldly and mundane all at once, enjoyable for the talent present in its creation and performance, and for the awe experienced in forgetting it is being performed at all.

More information about Screensaver Series can be found here. 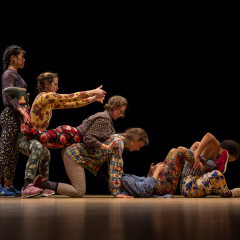 Janine Harrington’s dance piece hypnotizes and entrances in a homage to screensaver programmes. 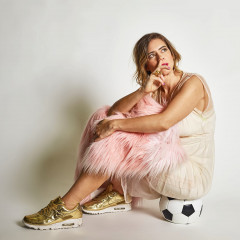