Growing up in a culture that often emphasises sexual love above all other forms can be alienating for those who do not experience sexual attraction. Fran (Frances Colin) is obsessed with sex. Her friends talk about it all the time, her mum refuses to discuss it, and she is determined to train herself to be good at it. The issue is, she feels no desire to do it. Convinced there is something wrong with her, she spirals into despair, pushing her friends and mother away and going to more and more extremes to ‘fix’ herself.

It is a story told in monologue and filled with heartbreaking moments. There are far too few narratives that focus on asexuality. It is exceedingly rare for media to contain an asexual character, let alone explore the anxieties of being ace. Love Me takes an unflinching look at the negative consequences of this lack of attention. Colin’s performance reaches staggering heights during the times in the play when her unhappiness and isolation reaches breaking point. When she explodes at her mother for never giving her advice on sexual relationships, she perfectly captures a feeling of being lost and alone, her voice breaking during a tirade that may have emerged from anger, but ends in helpless misery.

Another highlight for both the story and Colin’s performance comes after the most harrowing part of the narrative. After Fran feels intense regret over an action she cannot take back, her narrative voice switches from monologue to poetry, reading out a gut-wrenching spoken word poem that funnels her real emotions to the audience through abstract ideas.

This interplay between mediums like dance, poetry and monologue had a lot of potential, but needed to be executed more effectively to reach the level of impact it aspired towards. The first few scenes in particular were quite jarring, with the speed of the dialogue and the quick transitions between dancing, singing and story development being difficult to follow. It may have been beneficial to cut back on these extra elements. The strength of the performance came from the well-written story and the flow of emotion from its protagonist. The work as a whole may have been more coherent if these were the elements that were focused on throughout.

The supporting cast could also have been handled better. They each play several roles, and whilst this does not come across as confusing due to some clever staging decisions, it also spreads them too thin, not giving any of them the chance to really highlight their own acting skills.

This is not to say they are superfluous. Fran’s relationship to her best friend Maia and to her own mother work towards portraying alternate forms of love, both the familial and the friend-based, which is a crucial message to give. All forms of love have value and to see Fran accept this despite the constant lauding of sexual love by her society, is deeply moving. Self-love too, becomes an important part of her story.

Love Me deserves much praise for its well thought out and raw portrayal of an asexual coming of age story. Certain elements spread the production too thin, but this is only frustrating because of how much talent and commitment went into the aspects of the show that truly shone. 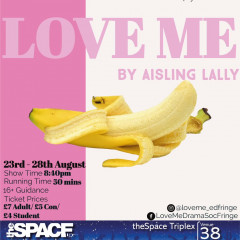