As utterly baffling as it is captivating. In this absurd, clownish performance Julia Masli combines highly experimental comedy with mesmerising visual lunacy to create… I’m not entirely sure what.

You do not have to understand it to enjoy it, which is handy, because I understood exactly none of it. It begins with her walking out on stage dressed like the lovechild of Laurel and Hardy. She wields a finger gun, but quickly relinquishes it to an audience member, and then, entirely non-verbally, convinces him to shoot her. The audience are in stitches by this point. Quite as to why, I don’t know, but I can’t deny I was laughing along with them. This sets the tone for much of the performance; she creates a bizarre situation, ropes the viewer into it, exercises complete control of the room and inexplicable hilarity ensues.

It would be disingenuous to suggest the room was constantly in uproar. It was rare for every audience member to laugh at the same time. Instead, each audience member would have their own moment during every comedic ‘bit’ where they’d suddenly think, ‘oh now I get it,’ or ‘I see where this is going’, and then they’d react accordingly. This meant reactions were often sporadic, rippling through the room in waves. I’d never seen the appeal of a ‘clown’ act until this show, the sheer creativity of the physical comedy was striking. Whether she was twisting in and out of a picture frame or staging an intimate love affair between her sunglasses-wearing knees, she kept the audience enthralled.

The funniest moments for me came when she’d take some nonsensical action, repeat it in a different way until you can see the ‘logic’ behind it, and then progress to the next step of the joke, but this time you know the inevitable result and watch on with a mix of mirth and horror. The amount of times I thought to myself ‘och, surely not’ is frankly excessive, but this level of engagement is something many performers would kill for.

There are definite hints of meaning throughout the show. A reference to Marina Abramovic goes a long way into contextualising some of the moments that delve closer to performance art than just strictly comedy, particularly the final beats of the performance.

Absurdist humour is a difficult beast to tame. Too much in one direction and it's all just nonsense, too much in the other and you’ll start questioning what you’re doing. Masli takes to this challenge with expert finesse. The laughter may have been inexplicable, but there was plenty of it. 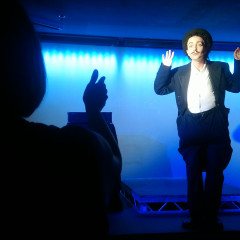 As utterly baffling as it is captivating. In this absurd, clownish performance Julia Masli combines highly experimental comedy with mesmerising visual lunacy to create… I’m not entirely sure what.