An enjoyably daft and visually captivating take on the absurdity of customer service jobs.

Receptionists is a physical comedy show that plays with the absurdity of mundanity in a workplace environment, in this case customer service in a hotel reception. The show is performed by two Finnish female clowns (my new dream occupation) who are as graceful as they are cartoonish.

The comedy is for the most part in the realm of slapstick, the performers trading in overblown physical gags that should be accessible and enjoyable to anyone in the audience. They speak rarely and when they do it is gibberish or a garbled amalgamation of several languages, or seemingly a parody of said languages. As well as adding to the general air of mayhem and confusion their act entails, this also simultaneously transcends and reinforces cultural differences, making them at once impenetrable and familiar to their audience.

But speaking of transcending – it is their choreography and the sense of movement, often dancelike, at times dreamy, that elevates their performance. Every movement is fluid and well-executed, adding dimension to the joke at hand and simply being downright entrancing. During a segment featuring illusions and magic tricks, I automatically clap at the trick’s pay-off, caught up in the moment and forgetting that I’m watching on-demand, several months behind and miles away from where they could have heard my applause. I was particularly taken with a moment where they work in tandem as a four-armed receptionist, deftly manoeuvring around with each other’s limbs (‘four-armed Finnish goddess of my customer service dreams’ may or may not have been the note I wrote down).

The only let down to the performance is its formulaic-ness, rarely straying into particularly unexpected territory for its genre – but then again, the environment that the performance depicts is formulaic and so perhaps there wouldn’t be a benefit to straying too far from that rigid structure. In fact, although the performance is light-hearted and absurd, it’s the recognisable mannerisms of mundanity that truly bring it to life. It probably finds a lot of its strength in its relatability; after all, customer service does often feel like a strange and ridiculous performance – and one many of us have had to engage in. Are we not all Finnish female clowns satirising the meaningless rigmarole of workplace mundanity?

Receptionists is available to watch on demand through the Edinburgh Fringe from 6 August. Tickets can be purchased here. 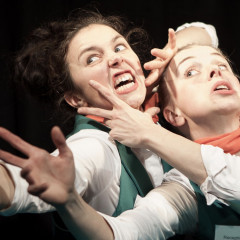 An enjoyably daft and visually captivating take on the absurdity of customer service jobs.