A mature depiction of the tumultuous life of a young carer and her brother, Wish List gives voice to a struggle many of us have little knowledge of.

Tamsin is one or two years out of high school, caring for her younger brother Dean and working as many shifts as she can get her hands on at a delivery company’s warehouse (or ‘enrichment centre’). Tired, stressed, and overwhelmed by her brother’s needs and her work’s constant ‘professional betterment’ agenda, she does everything she can to keep her and her brother’s lives together. When the council cuts their disability fund, she finds herself feeling like she’s at the mercy of an uncaring world.

The audience are given very little time to breathe throughout the entire production. Chloë Johnson excels in her role as Tamsin. Her life is non-stop, and the audience becomes immersed in her plight. There is an unending number of obstacles placed in her path, and this feels tragically authentic. The siblings’ situation is rendered real by the professional and clinical language used in medical reports and letters from the disability benefits office of the council. There is a sense that extensive research or experience went into the writing of these documents, and this fuses with Johnson’s acting to create a tangible, slice of life image for the audience. The pain and exhaustion in her voice grants weight to many seemingly mundane scenes.

The heaviest moment in the production however, comes from Michael Robertson’s potent portrayal of Dean, who suffers from severe OCD. Before this scene, every time Tasmin left the flat, the story and audience followed her, leaving Dean largely absent from the stage when his sister was not present. This changes when she leaves for a shift after he has promised to make himself food for the day. He is alone on stage when an accident occurs, a painful one, and his physical reaction alone is enough to create a tightening in the stomach of anyone viewing it.

He begins to make a decision, a horrible but inevitable decision that the audience realises the cause of and wants to stop but knows that they are powerless to prevent, resulting in a moment of such agonizing tension that a palpable hush came over the venue; it felt as if not a single breath was taken for the duration of this scene.

It would have been welcome to see Dean have more time to speak for himself in a way those with mental health issues are often not given the chance to, but it is understandable given that his sister is the protagonist.

Every interaction Tamsin has with Dean demonstrates her empathy and love for him, but is contaminated with a deeper desire, one that she is ashamed of — a wish for her life, and her brother, to be different.

This sense of thwarted desire is made obvious during a scene in a bar between her and her colleague, Luke (Josh Dobinson). This conversation is one of the few moments of respite in the play, and demonstrates Luke’s effectiveness as a foil to the harshness of the rest of Tasmin’s world, with Dobinson imbuing the character with charm and kindness.

Tasmin’s manager, referred to as ‘The Lead’ (Jack Elvey), is another side character that has a significant role in developing the production’s themes. He spends the majority of the show as a severe, bureaucratic irritant, but when he tells Tasmin that he is also just another victim of senseless higher-ups, it turns him from a one dimensional antagonist to an embodiment of the institutionalised nature of many social issues that impact young carers.

A heart-wrenching insight into the lives of two siblings with no one but each other, Bone Struck Theatre Company has crafted an impactful tale that hammers itself into the hearts of the audience.

Tickets to the remaining shows can be found here. 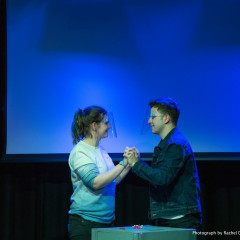 A mature depiction of the tumultuous life of a young carer and her brother, Wish List gives voice to a struggle many of us have little knowledge of.