Three young men at different stages of both early fatherhood and prison life struggle against emotional vulnerability and an inevitable cycle of incarceration that passes through the generations.

Created by playwright Samuel Bailey, the show is set during various parental training sessions run by Grace (Rebecca Morgan), an instructor hired by the Polmont Young Offenders Institute. The setting is an effective one. There’s the sense that these lessons provide a bubble of safety for the students to escape from the stress of prison life. This idea is challenged at times, particularly by the students themselves.

All three are excellent and would each be a standout in any other show. In this case, Beglay’s Cain takes the top spot with a non-stop, in-your-face, this man drinks red bull like water performance that contains a level of depth you wouldn’t expect from the character. Every time there’s a crack in his hyper-energetic armour, the audience becomes more connected to his struggle - the same is true for every character. Ryan and Cain both contain complexities that go past their aggressive posturing, and Jonjo’s shyness goes a long way towards indirectly breaking down the barriers between the young offenders.

It is this contrast between the self-aggrandising rhetoric the young men spout, and the underlying sense of hopelessness that permeates their situations. Cain is a repeat offender that Ryan believes will spend his entire life in and out of prison. Jonjo works hard to prepare for his soon to arrive child, but he cannot even communicate with the child’s mother. And Ryan, despite being gifted with numbers, refuses to believe he would be accepted in higher education. Their struggles and flaws make them all feel real; the audience is hit hard by every setback they face, and there is a genuine sense of happiness when they begin to bond.

I do feel as if the script could have been a bit tighter. Some of the slower moments, like Jonjo and Grace’s conversation in the play’s final scene, could have benefited with a less is more attitude. This problem was exacerbated by Jonjo’s slow, stuttering way of speaking, which outside of this scene is an extremely effective character trait that speaks to Dron’s skill as an actor. In this instance, however, there were one too many pauses in pivotal sentences.

This and some awkward scene transitions are the only complaints I have. As far as live theatre is concerned, this is what you want to see. A well-told, emotionally resonant story with themes that reach into the real world and with beautifully crafted characters, Shook is a must-see for this year’s Edinburgh Festival Fringe.

Tickets for the remaining performances can be found here. 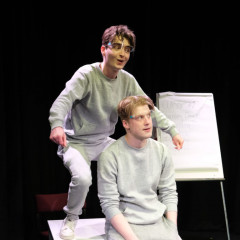 Three young men at different stages of both early fatherhood and prison life struggle against emotional vulnerability and an inevitable cycle of incarceration that passes through the generations.