A showcase of skilled impersonations and an in-depth knowledge of artist Andy Warhol’s life.

An hour-long, one-man monologue with minimal costume changes and multiple caricatures. The potential for theatrical disaster is high with Warhol: Bullet Karma. But this take on famous artist Andy Warhol’s life, played by Gary Roost and directed by Kenneth Hadley, is a surprising success.

The audience of course relies heavily on Roost’s one-man performance to keep us engaged over the course of the hour. Luckily, he’s up to the task, with a pitch-perfect imitation of Warhol’s American accent, as well as the various other figures in the artist’s life, including Valerie Solanas, the woman who tried to kill Warhol and the British painter Francis Bacon. As Warhol, he speaks retrospectively of his journey from unknown artist to the pioneer of pop art that he became in the 1960s. Roost has clearly done his research on Warhol, and the show manages to tow the line between catering to those viewers who are already well-versed in the artist and his work to the newbies who want to learn more about his life. I finished the show having learned about Warhol’s filmmaking in ‘The Factory’, his initial dream to become a dancer and his opinions on pop star David Bowie, which is a testament to the behind-the-scenes work that goes into a production such as this.

Aside from Roost’s performance, perhaps the only other flashy element of Warhol: Bullet Karma is the screen that is cut into four sections of primary colour, as a direct emulation of Warhol’s colourful pop art. Otherwise, the setting remains the same throughout the entirety of the monologue, and the costume changes between impersonations only involve Roost taking off glasses and putting on hats. Roost and director Hadley have made shrewd choices as to where to direct their time and energy within this play.

Warhol: Bullet Karma is a masterclass in bold simplicity, and is worth any theatregoer’s time. 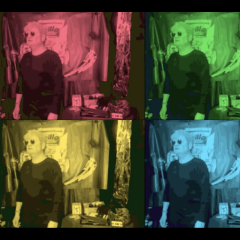 A showcase of skilled impersonations and an in-depth knowledge of artist Andy Warhol’s life.