In The Sweetness of Water, Nathan Harris offers his readers a gorgeous exploration of race, emancipation, grief, and sexuality.

On 27 July, Nathan Harris’s The Sweetness of Water was announced as being on the Booker Prize longlist. Prior to this, Oprah selected the novel for her book club. After reading Harris’s debut, it is easy to see why it has been such a hit. The Sweetness of Water is an ambitious but well-executed novel set in Georgia during the Reconstruction era (the days following the end of the American civil war). Brothers Landry and Prentiss are newly freed and hoping to earn enough money for their passage North. As a result, they begin working for George Walker, who is grieving for his missing son Caleb. But, it is not long before the inhabitants of Old Ox catch wind of their arrangement, and chaos ensues.

Much of the brilliance of The Sweetness of Water lies in Harris’s outstanding character development. The novel does not only follow Prentiss and Landry but George and his wife Isabelle too. In consequence, the main character is not clear cut as Harris provides a cast of characters, all of whom are equally well-developed. Even the side characters like Clementine are so complex that they demand their own story.

In addition to the characters, the setting is also expertly developed. The town of Old Ox and the surrounding woodlands are made vivid by Harris’s rich and lyrical prose. Harris’s language is beautiful, but not to the extent that it obscures and overshadows the plot. In actual fact, the plot itself is engaging and tense. However, it should be noted that the novel is a slow-burner. In order to appreciate Harris’s debut, you need to give it the time that it deserves. The Sweetness of Water is heartbreaking, but it is also full of promise, as Harris highlights the indomitable spirit of love.

The Sweetness of Water is a strong contender for the 2021 Booker Prize and an instant modern classic. 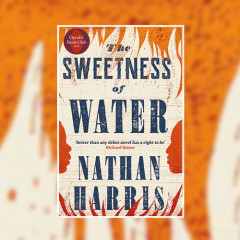 Review: The Sweetness of Water by Nathan Harris

In The Sweetness of Water, Nathan Harris offers his readers a gorgeous exploration of race, emancipation, grief, and sexuality. 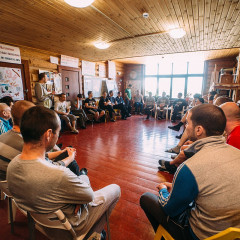