Six Crimson Cranes is a mesmerising retelling of the Grimm Brothers’ The Six Swans, with an East Asian folklore twist.

Elizabeth Lim is the author of the Blood of Stars duology and contributor to the New York Times bestselling A Twisted Tale series. Published this July, Six Crimson Cranes is a YA novel following Shiori, the only princess of Kiata. Shiori has a secret: she possesses forbidden magic. Shiori has spent her life concealing her powers, but on the morning of her dreaded betrothal ceremony, she loses control, catching the eye of her stepmother Raikama. A sorceress herself, Raikama banishes Shiori from Kiata, turning her six brothers into cranes. As part of her curse, Shiori must keep her identity hidden: for each word she utters, one of her brothers will die. To save her brothers and the throne, Shiori must place her trust in Takkan, the very boy she has fought against marrying.

Six Crimson Cranes is captivating, magical, and immersive. The scenery of Kiata is vivid, and the world that Lim builds is beautiful. Lim pays close to attention to detail, creating a landscape that feels simultaneously realistic and whimsical. In addition, Lim keeps her readers on their feet. Six Crimson Cranes is full of twists and turns that force you to reevaluate your perception of the characters and their motives, making the book deliciously addictive and unputdownable. This is added to by the fact that the book is extremely well-paced. No parts of the story drag – and the ending is not rushed. Although Six Crimson Cranes is the first book in a duology, the conclusion is tied up nicely, leaving only a few loose ends for Lim to follow up in the sequel.

Furthermore, you cannot help but root for Shiori. She is brave, smart and loyal, making her extremely lovable. Also, her character is well-developed – as the story progresses, you can feel Shiori’s emotions. Additionally, Shiori forms beautiful bonds along the way of her adventure. Her relationship with her origami bird Kiki is adorable, as is her relationship with Megari, Takkan’s little sister, and her brothers. You will be sucked into the story by Shiori and the characters with whom she forms bonds.

Overall, Six Crimson Cranes is a breathtaking fantasy and one of this year's standout book releases. 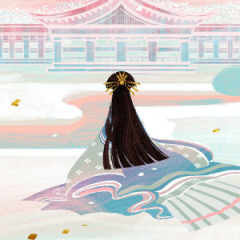 Six Crimson Cranes is a mesmerising retelling of the Grimm Brothers’ The Six Swans, with an East Asian folklore twist.