Mad Hatter’s Daughter are back once again with their next exhilarating and upbeat single ‘Wolves’.

With this being the second single off their upcoming album ‘Where Are We Runnin’ the band go from strength to strength, as they kindly introduce a blend of alternative pop into the works.

The family band, made up of singer, songwriter Kira Isles and multi-instrumentalist Buzz T. Isles have welcomed their latest newcomer to their world, who are all set to tour and hit the road later in the year on their first ever UK tour. Bringing together family life and rock n’ roll in one!

With a desire to widen the ever narrowing space for the individual in society ‘Mad Hatter’s Daughters’ new single ‘Wolves’ charges into summer like a herd of stampeding wilder-beasts. Howling down at the doors of collectivism ‘Wolves’ offers us a timely reminder that we are defined by who we are as individuals, not by whichever group we may happen to belong to.

In a team effort with Grammy nominated engineer & producer Jeremy Murphy (Adele, Mumford & Sons, Emeli Sandé) this animalistically raw concept has been captured and contained in a masterful production that is sure to leave listeners howling at the moon for freedom.

“With the force of a stampede “Wolves” draws an unapologetic line in the sand for the empowerment of every individual in a beat driven primal frenzy!” - Mad Hatter’sDaughter

The idea behind “Mad Hatter’s Daughter” came to Buzz T. Isles the very first time he heard his wife Kira sing. Having worked as an audio engineer, he knew she had something special. A few months later, the couple released a cover of Trent Reznor’s “Hurt”. The subsequent popularity of the video with its raving reviews inspired the duo to go even further.

Eager to create songs for people all over the world and not just in Germany, the duo invited British friend and songwriter Josiah Smithson to the party. The creative combination of all three members clicked immediately and opened doors to the UK in a rekindling of the historically significant musical relationship between Hamburg and England.

Their first EPs “Life Affairs” and ”Walk with me” secured the band over 3 million streams and 20 weeks of airplay in the German Charts. After a sold out tour in Germany and a few small festivals in the UK, the band joined forces with Grammy nominated engineer Jeremy Murphy (Adele, Sam Smith, Emeli Sande, Robbie Williams) to work on their upcoming album “Where Are We Runnin”. Jez helped to achieve the dynamic sound the band were after, one that could tip its hat to both younger and older generations.

“We’ve definitely gone for a more timeless feel producing this album - a number of the tracks have taken on a bit of a Fleetwood Mac feel. There’s certainly something for everyone.” - Jez Murphy 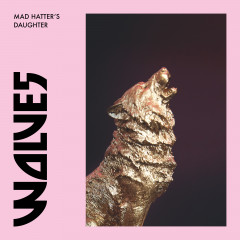 Mad Hatter’s Daughter are back once again with their next exhilarating and upbeat single ‘Wolves’.