An affecting exploration of loss and remembrance, Notes on Grief adapts Chimamanda Ngozi Adichie’s original essay for the stage at this year’s Manchester International Festival.

Directed by Rae McKen, Notes on Grief is a 90 minute play adapted from an essay written by the renowned Chimamanda Ngozi Adichie on the death of her father, James Nwoye Adichie.

The production stars Michelle Asante, who narrates as the author throughout the piece, in addition to Itoya Osagiede and Uche Abuah, who perform as a multitude of different characters from Adichie’s life. Notes on Grief is an elegiac play split into multiple sections that address different aspects of grief, mourning and remembrance. Asante speaks in an extended monologue while directly addressing the audience throughout its runtime, fondly relating various anecdotes about the elder Adichie and Igbo culture as well as raging at the all-encompassing nature of grief and loss.

Indeed, Asante’s performance is captivating to watch, at one moment seething at the cultural traditions surrounding the ceremony of a funeral, and at another, enacting the anguish caused by the remembrance of Adichie’s father’s death after his appearance in a dream. She deftly captures the emotional resonance of the bond between Adichie and her father through her dialogue, with this being physically embodied at various points through performative dances with Osagiede and Abuah and interludes as well. The element of grief feels deeply personal, but the audience is made to feel a modicum of the same grief through Asante’s powerful execution.

The performances of Osagiede and Abuah are also of note, as they move between different roles seamlessly, including Adichie’s father, mother and other family members, in addition to a hospital doctor, to name a few. An almost call and response-esque dynamic is established in the piece, where Asante will narrate and contextualise when a character is about to speak, with Osagiede and Abuah relaying the lines of dialogue to be spoken. This is well-done, and both believably depict the characters they are playing, facilitating the smooth staging of the play.

The entirety of the piece takes place in one set that is made to look like a familial living room or study, with seats being moved around to enable the centering of characters, and lights dimming or changing colour to reflect the mood of each scene. I streamed an on-demand performance of the production, and the use of multiple cameras and angles enhanced my experience, as the variety of close-up and wide shots allowed me to focus on what McKen and the piece wished to highlight. Images or filmed footage were projected onto a curtain at the rear of the set at several points, with these instances reinforcing the emotional aspect of the play.

A deeply moving piece that forces viewers to reflect on their own understanding of loss through the staging of Adichie’s experience of it, Notes on Grief is a must-see at this year’s Manchester International Festival.

To book tickets to watch Notes on Grief, click here. 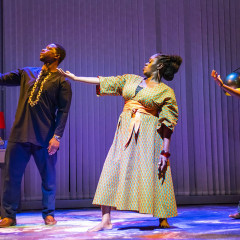 An affecting exploration of loss and remembrance, Notes on Grief adapts Chimamanda Ngozi Adichie’s original essay for the stage at this year’s Manchester International Festival.