Reviewing Stacie Woolsey's three-part narrative, based on a fictional industrial revolution after creating the strong, malleable and corrosion-resistant material of graphene in the north of England.

One of the stand-out pieces produced by Arts Council England and BBC-supported New Creatives is the almost dystopian and realistic creative audio narrative conceived by the mind of Stacie Woolsey, anthropological future designer and artist. It follows the discovery of graphene, a real material invented in 2004 that could be seen as the future of product design, due to its strength, malleability and cost.

Woolsey’s audio piece features three narratives based on the industrial boom of graphene; an incredibly hard, corrosion-resistant substance isolated from graphite. Woolsey conveys how the northern UK mining areas experience a prosperous industrial revolution as world demand increases. The recollections highlight the wealth generated locally alongside the strange and, ironically, feasible inventions that could be made, and the problems that could arise from them. This is achieved in a way that is honest, well acted and funny, expressing the innovation of society as well as its flaws.

Introduced by metallic clanking then the backdrop of hustle and bustle and machinery, each story is told in a monologue fashion by a differing member of society. The first is that of a salon worker from Bentley, one who mixed in graphene when treating nails, the results were “steel cap fingernails”. They were stronger than any metal and that could be fashioned into tools, from spanners to door keys. They would quickly become a popular treatment.

The mother of a plasterer spoke next, her son went to work in the graphene factory. He came out with the idea of mixing the material with plasterboard. Her story envisions him building shelters and extending houses that would not suffer water damage and were structurally sound; a chance to help to eradicate the housing crisis. Finally, an older man recalls graphene in hair dye, it was subsequently banned for hair thickening issues, but then sold to a dog kennel. Here, tough and resistant fur became perfect for underground dog fighting. Once banned by those governing, it was used by the police for their own hounds.

Woolsey’s piece evokes many thoughts, that of positivity, innovation, believability and hope. This is contrasted by the flaws of society and how the distribution of resources is flipped to suit those in power, reminiscent of what historically befell miners in the north. It is poignant and realistic, and although fairly simplistic, gives an interesting perspective and is thoroughly intriguing. 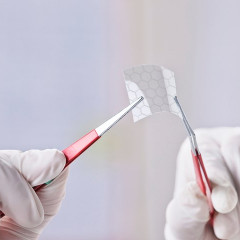 Reviewing Stacie Woolsey's three-part narrative, based on a fictional industrial revolution after creating the strong, malleable and corrosion-resistant material of graphene in the north of England.