Part memoir, part examination of motherhood, The Wild Track follows Margaret on her five-year journey to adopting a child. But pivotally, the book asks, ‘what makes any woman want to become a mother?’

The Wild Track is a deeply insightful memoir by critic, writer, BBC broadcaster, and academic Margaret Reynolds. Single and in her forties, Margaret comes to the realisation that she wants to have a child. More specifically, she wants to adopt. Margaret’s memoir follows her on the wild track that is the arduous adoption process – a track that begins with intense scrutiny but ends with success as Margaret adopts her daughter, Lucy. Margaret’s memoir is also an interleaving of her own childhood as well as an exploration of what motherhood, home, and identity truly mean.

Margaret’s memoir has many great merits. Perhaps the greatest one, though, is the brutal honesty with which she tells her story. From beginning to end, Margaret does not shy away from admitting to her own mistakes. Most of these mistakes link back to her decision to adopt a child from overseas (in the end, she adopts from the UK). She not only admits that it was wrong to conceal her sexuality from the Chinese adoption board, but she also admits that throughout the adoption decision process, she often thought of herself rather than of the children. It is Margaret’s willingness to own up to her mistakes that makes her memoir so sincere, raw, and genuine.

The rawness of Margaret’s memoir is exemplified in the final two chapters. Here she gives a voice to Lucy. Lucy’s chapters provide a child’s insight into adoption – they show that whilst adoption is, overall, a joyful process for parent and child alike, it can initially be painful and upsetting. It is a process fraught with conflicting emotions. As Margaret notes herself, before bringing Lucy home for the first time, ‘my happiness is her sadness’.

Additionally, Margaret’s memoir is a rich and lyrical interweaving of poetry and literature. Her use of literature to better understand what motherhood, home, and identity mean adds a unique depth to her story. Although, at times, it does feel as though these references to literature could have been more succinct as the novel has a tendency to veer off on its own wild track – a track that is not entirely necessary to the story itself.

Despite its very few pitfalls, The Wild Track achieves what it set out to do. It answers the question: what drives a woman to become a mother? To put it simply, the answer is love. 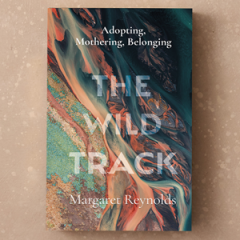 Adoption and Motherhood: The Wild Track by Margaret Reynolds

Part memoir, part examination of motherhood, The Wild Track follows Margaret on her five-year journey to adopting a child. But pivotally, the book asks, ‘what makes any woman want to become a mother?’