An insensitive and untimely production based around the life of Ghislaine Maxwell.

Content warning: This play references sex trafficking and grooming which some viewers may find triggering.

Ghislaine Maxwell is currently imprisoned and under investigation for her alleged role in assisting convicted sex offender Jeffrey Epstein. Recent court testimonies have claimed that she sexually abused underage girls alongside Epstein in the 1990s. To create a production giving voice to Maxwell’s defense and constructing her as a mirror of Victorian playwright Henrik Ibsen’s famous character Hedda Gabler is in poor taste to say the least.

The entire production consists of creator and lead actress Kristen Winters playing Ghislaine Maxwell on a minimalistic stage, delivering a monologue about her life. The timeline jumps between Maxwell’s childhood and her current imprisonment, accompanied by flashing stage lights.

The issue with referencing Ibsen’s fictional character Hedda Gabler is that it mythologises Maxwell and her involvement with Epstein. She is not an imagined figure to project philosophical questions onto, like the ones posed in the play’s description: ‘What makes one person a victim, and another a monster?’. She is a real human being and the consequences of her (alleged) actions are real and harmful. Even the production’s attempt to incorporate a misguided feminist approach through the question ‘Why are women deemed monsters for much lesser crimes than men?’ is entirely offensive. Maxwell should not be used as a source for dramatic sympathy or an exploration into the inner workings of human nature.

It could be argued that I’m missing the point of Ghislaine|Gabler. It shows lead actress Kristen Winters confined in a demarcated square onstage, meant to represent Maxwell’s jail cell, so there is an acknowledgement of her current status of being under investigation. However, this is all undone by the timeline jumping between Maxwell in the present and scenes of her childhood with her abusive father Robert (both adeptly played by Winters). This promotes the time-old justification for abusers that they are excused for their horrific actions in the present because it all stems from whatever past abuse they experienced themselves. Not to mention that, because the play is mostly constructed as a monologue, we only ever hear from Maxwell and occasionally her father. If compassion and expression should be given to anyone, it is Epstein’s victims.

It feels too fresh for this production to use Maxwell and her association with a convicted sex trafficker as a channel for theatrical observation. Theatre should be a medium to give voices to the voiceless, not their abusers. 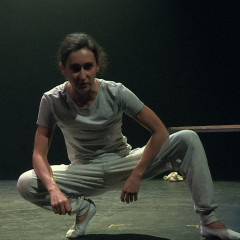 An insensitive and untimely production based around the life of Ghislaine Maxwell.