Doja Cat proves to be no match for the pandemic, adding five more songs to her award-nominated ‘Planet Her’ album.

If you’ve not heard about Doja Cat then it is evident you have been living under a rock as she is fast becoming a leading female figure in today’s music scene. Starting her career at 16 years old, she uploaded her first track ‘So High’ which landed her a record deal with RCA Records, but not before the song was streamed over 30 million plays.

‘Planet Her’ deluxe comes to complete a trio of studio released albums, catchy Tik Tok hits and nostalgic disco euphoria. This album, comprising 19 songs featuring industry titans such as The Weeknd, Ariana Grande and Eve, is her way of asserting her place in an already victorious playground. These tracks were great additions to an already popular project providing some variety to her childlike quirky sound.

Stand out songs include Women, Kiss Me More, Aint Shi*t, You Right and Gut Into It (Yuh).

Her sound embodies a feline-esque dominance with variant lyrical flows highly influenced by Nicki Minaj and Busta Rhymes. The juxtaposition of her overbearing sweetness and controversial lyrics makes for an entertaining listening experience. As NME admitted, “Sometimes, it’s not so much what she says, but the way that she says is,” that creates impact within her work.

The album is an easy listen, aiming for a summer vibe, but shows her diverse range from hard rap to soft sultry R&B. This, combined with her Tick Tok certified but annoyingly catchy melodies, seem to suggest that Doja could do no wrong in her album.

Now the project on a whole is positive but my one question is how much does Doja Cat put into her projects? The industry right now features up-and-coming artists such as Olivia Rodrigo, Victoria Monet and Griffy, all of who exemplify artistry – singing, writing and producing their own work. Looking at the ‘Planet Her Deluxe’ song credits, Doja writes alongside a team of nine. Now, there's nothing wrong with having an amazing creative team, but in this day and age being a multi-talented artist far surpasses being a well-marketed one.

A little harsh I know, but we as consumers are heavily invested in artistry beyond the hits, now wanting to see a skill-set and harnessing their craft.

However, critics aside she still stands as a leading lady amongst Cardi B and Megan the Stallion, creating back to back hits that never fail to chart. Her artistry can be questioned but her success is undeniable. I’d definitely give ‘Planet Her’ a listen but in all honesty, it will be unavoidable.

Header Image Credit: Doja Cat 2019 BET Awards1.png" by The Knockturnal is licensed under CC BY 3.0 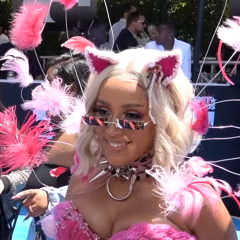 Doja Cat proves to be no match for the pandemic, adding five more songs to her award-nominated ‘Planet Her’ album.