How The Word is Passed: A Reckoning With The History of Slavery in America is Clint Smith’s first work of nonfiction. By interweaving the past with the present, Smith sketches a history of slavery that is both informative and poetical.

Clint Smith, winner of the Best Poetry Book from the Black Caucus award of the American Library Association, has produced a work of nonfiction that feels timely in a world of BLM protests. In his novel, Smith visits a handful of public historical sites in order to determine how the history of slavery is told and passed. Not only does Smith visit sites in America, such as Monticello Plantation, Angola Prison, and Galveston Island, but he also visits The House of Slaves in Senegal – a memorial to the Atlantic slave trade. The standout quality of the novel is its ability to transport its readers so completely to these locations. Having read How The Word is Passed, you truly feel as though you have accompanied Smith to some of the world’s most important historical sites. Smith’s lyrical descriptions of his travels are a constant reminder that he is not only a scholar but a poet too.

But Smith’s novel is much more than a travelogue. It can be better described as a rumination on how slavery has shaped the contemporary world. Upon learning of streets and schools in Southern America named after Confederate generals, it becomes clear to the reader that the history of slavery is very much entangled with the present moment. To this day, schools and streets are disturbingly named after individuals who fought in the American Civil War to preserve slavery and segregation in the South. The legacy of slavery lingers on, it seems. Smith drives home this point most successfully in his incredibly emotional and thought-provoking epilogue. Here he draws on the history of his own family as he interviews his grandmother, who experienced the effects of segregation first-hand.

However, Smith’s strongest argument is the one to do with ‘miseducation’. Drawing on his own experience as well as his various discussions with tourists and tour guides, Smith makes a point that the public school system has been teaching sanitised and misleading versions of history. For example, children are often taught that Thomas Jefferson, one of the Founding Fathers of the United States, was a ‘good’ man. Children do not learn about how Jefferson owned hundreds of slaves. The result of this is a distortion of history – a purposeful forgetting of a past which must always be remembered, no matter how painful.

All in all, How The Word is Passed has been expertly researched and beautifully written, guaranteeing it to be one of this year's best works of nonfiction. 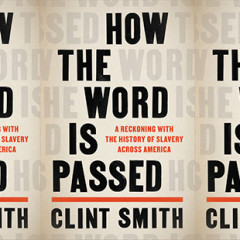 June nonfiction release: How The Word is Passed by Clint Smith

How The Word is Passed: A Reckoning With The History of Slavery in America is Clint Smith’s first work of nonfiction. By interweaving the past with the present, Smith sketches a history of slavery that is both informative and poetical.