Brining to the forefront topics that were off-limits to Regency-era novelists, Reputation is a feminist twist on the classic novel. From alcohol to sex, Reputation touches upon all that would once have been considered scandalous.

Reputation is YouTuber Lex Croucher’s debut novel. Publishing on 8 July, Croucher’s witty romcom is comparable to Netflix’s hit series, Bridgerton, making it the perfect read for those of us who are eagerly awaiting the release of season two!

Set in the Regency era, Reputation is narrated by middle-class Georgiana Ellers. Forced by her parents to live with her rather dull aunt and uncle, Mr and Mrs Burton, the unsatisfied Georgiana wishes for a life of excitement – for a life filled with lavish parties. Most importantly, Georgiana longs for the company of upper-class Regency society. So when Georgiana encounters the extremely wealthy and outspoken Frances Campbell, her dreams are made true as she is initiated into an enchanting circle of friends – all of whom spend a great deal of time scandalously drinking and partying. But, after a summer spent with Frances and her posse, Georgiana soon realises that all that glitters is not gold.

As the title suggests, Croucher’s novel explores the importance of reputation for women at a time when reputation was everything. However, to summarise the novel so simplistically is to do it a great injustice. What makes Croucher’s novel so engaging is the way in which she puts a modern twist on works by the likes of Jane Austen. Most significantly, Croucher explores issues and gives voice to individuals who were silenced by Austen and her contemporaries. In particular, Croucher explores drug and alcohol abuse as well as sex and consent – all of which were considered unseemly topics by authors in the eighteenth and nineteenth centuries. Not just this, but Croucher provides the reader with a diverse cast of characters allowing for discussions of race and same-sex relationships to blossom.

However, whilst Croucher does introduce these topics, they often feel as though they are quickly gleaned over. For example, at one stage of the novel, Frances begins an interesting discussion about slavery. But, this only lasts for a sentence or two at the most. Additionally, for a Regency-era novel, there are very few historical references. Greater research into the eighteenth and nineteenth centuries would have added some much needed depth to the storyline.

Overall, though, Reputation is a refreshing take on historical fiction that will be loved by fans of Bridgerton, Mean Girls, and Jane Austen alike.

Reputation will be available to purchase from 8 July 2021. 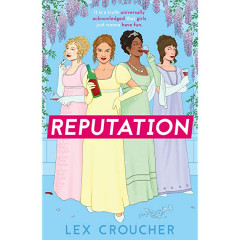 Brining to the forefront topics that were off-limits to Regency-era novelists, Reputation is a feminist twist on the classic novel. From alcohol to sex, Reputation touches upon all that would once have been considered scandalous.