The police cops delivered a devilishly good show. A 90’s tribute to Manchester’s gritty underground covering everything from Kimchi (you’re kidding me) to Mr Perryworth’s primary school for peculiar students. I really enjoyed this one. Another solo venture on my road to Fringe notoriety, I left The Warren with the knowledge that I’d witnessed a truly entertaining show full to the brim with one liners almost as good as the hit 1960 classic Oliver! the musical. (Don’t worry, it’s relevant).

There’s nothing like a tenuous father-son relationship to tie a chaotic quasi-crime narrative together. Tommy Dixon drove a central story line following a vampire slayer (Badass) and his priest accomplice, the devil and his co-conspiritors, a good-for-nothing step father with the ambition to dye his hair to match Oliver Twist’s sandy blonde highlights, and, of course, a bare bum. It was as silly as it was scatty, a lighthearted hour of physical comedy, “seamless” transitions, and enough Ken-doll zip wires to shake a sock sword at.

The last minute callback to teen-hood came at no surprise, we all remember those halcyon days in GCSE drama — the endless hours at Razzmatazz academy that trigger nothing but… happy memories and a very devoted parent. Thankfully, Badass and his pals bring us back to amateur conceptual dance routines and a chorus of prepubescent voices in a flashback scene to the Devil’s adolescence. The standout line was delivered with the uneasy confidence of a tween in a homemade costume: “That’s Jennifer, the coolest girl in Heaven.” I’ve been there, kid — she’s not interested. 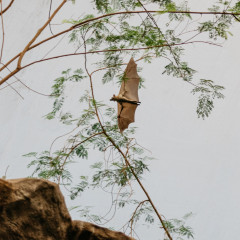