After keeping her fans waiting in anticipation for five years, Lorde returns with her new summer single ‘Solar Power’.

The position that Lorde occupies in the music industry is one that most musicians would kill for. At only 24-years-old, she holds the mythological status of an artist of unrivalled talent who can disappear for five years at a time and still maintain a devoted fanbase. Since the release of her critically acclaimed debut albums Pure Heroine in 2012 and her follow-up Melodrama in 2016, the closest thing to controversy she has gotten herself into is her secret Instagram account that reviews onion rings. Cool, calm and collected, Lorde is an anomaly in a fast-moving and often soulless industry.

It’s therefore no surprise that the release of her new single ‘Solar Power’ from her upcoming album of the same name has been met with exhilaration online. On top of this, the release of the single on June 10 fatefully coincided with a solar eclipse, as though even the universe was proclaiming itself a Lorde fan. The track offers the perfect seasonal tune for a summer of optimism and enjoyment, as Lorde’s trademark breathy singing voice is paired with an upbeat acoustic guitar and a psychedelic backing track.

The accompanying music video shows the New Zealand singer cheerfully dancing on a summery beach, with Lorde telling Australian radio station Triple J that "we built literally basically a universe on a secret beach. The first video is me introducing you to the world of the album and the videos, I play a kooky tour guide almost". Through this aesthetic, the song acts for listeners as the ideal musical antidote to being stuck inside for the past year, and successfully maintains Lorde’s ‘cool girl’ brand.

‘Solar Power’ stands in contrast to Lorde’s earlier and thematically darker releases, such as her career-making single Royals, a lyrical criticism of consumerism, and her most recent single Homemade Dynamite, which explores a dangerous romantic relationship. Yet she’s managed to effortlessly navigate this change to a more lighthearted sound, while still ensuring ‘Solar Power’ remains recognisable within her unique oeuvre.

The summer has only just begun, and Lorde has already provided the perfect soundtrack for it. 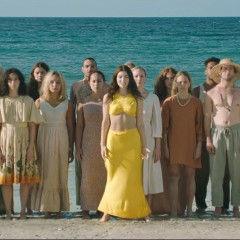 'Solar Power' review and the legend of Lorde

After keeping her fans waiting in anticipation for five years, Lorde returns with her new summer single ‘Solar Power’.