With the use of virtual reality, it’s hard not to instantly become completely immersed in ThickSkin Theatre’s MATCHBOX production Petrichor. The production was filmed with 360° video, meaning you can look all around the space using either a virtual reality headset, your mobile, or in the browser navigating with mouse and keyboard. Lacking any appropriate VR hardware, I was watching on the browser, but this didn’t negatively impact my submersion in the story. The 360° scene opens with the audience placed at the centre of a small four-walled space with obscure images projected onto each wall, as an ominous voiceover introduces this dystopian world “where every moment is muted, managed and monochrome”.

Two actors then appear in the space. There is no dialogue spoken by either of them throughout the entirety of the 33 minute show, and their performance is given solely through interpretive dance. Through VR the audience sees the actors move and multiply around us in a circle, and this choreography by Jonnie Riordan and Jess Williams tells as much of the story as the projected images and the voiceover do. The actors’ movements start off as regimented as they learn to follow the commands of “eat”, “work” and “sleep” before a gradual fluidity becomes apparent, coinciding with their escape from the space.

The plot is reminiscent of the Black Mirror episode ‘Fifteen Million Merits’ as well as the lives we have led under lockdown during the pandemic, and it’s tempting to focus only on this through the claustrophobia, repetitive actions and the voiceover telling the actors “you couldn’t watch the news for fear of more bad news”. Perhaps this was the intention, but the beauty of the show lies in the simplicity of watching the two individuals gradually move closer together before finding their freedom with each other in the outside world.

If you can look past the potential gimmick of virtual reality, Petrichor is a stylistic and contemplative piece of theatre. 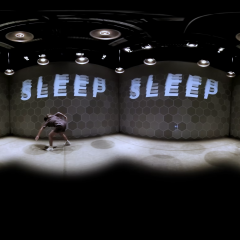