As with many creative professionals over the past year, comedians have been faced with the challenge of performing their comedy without a live audience. Remaining funny while telling jokes to a camera in a small room (which has come to be known as ‘lockdown comedy’) is no mean feat, but Sally Ann Hall is enough to pull it off with her virtual show Half Baked Alaskan.

Her brand of comedy is made immediately clear within the first five minutes of the hour-long show, with jokes about feminism and sex. Her eagerness to tackle potentially taboo topics (such as the first time she used a tampon) is a major part of her appeal as a comedian. She deftly strikes the balance between lighthearted jokes and more serious stories, telling the viewer about her personal experiences with sexual assault. This no-holds-barred approach cuts directly through any potential awkwardness from the claustrophobic echoey setting and close-up camera angle. This being said, the routine could have done without the uncomfortable background laughter of what sounds like three people sat behind the camera. But given that this is an “early version” of her routine, this is understandable.

Hall surprises even more with her musical talents, which involve her singing original comedic songs while playing the keyboard. This, along with the lockdown setting, is in the vein of popular comedian Bo Burnham’s recent Netflix special Inside, which is a must-watch masterclass in lockdown comedy. However, Hall can still stand tall above the rest with her engaging storytelling and delivery, which is essential to the routine as the audience has nothing but her to visually focus on.

Half Baked Alaskan could so easily have fallen flat and been unbearably cringey, but Hall is a testament to confidently pursuing your passions and remaining creative in nonideal situations. 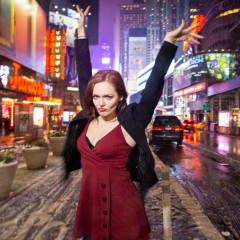