Voice MagArts AwardReviewsReview of the movie…

East meets West in a fusion of cultures and art with fun times for all.

East meets West in a fusion of cultures and art.

Big Hero 6 is a movie about Hiro Hamada, a child prodigy who has to deal with the grief of losing his older brother, Tadashi who died in a fire. Hiro works with Baymax, a healthcare robot built by Tadashi to find the truth about the circumstances surrounding his brothers death.

One of the most interesting aspects of Big Hero 6 is the inclusion of darker subject matter than most of Disney’s creations. Personally I am a big fan of Disney and I fully believe that this movie lives up to studios name and reputation.

Big Hero 6 is an enjoyable film that manages to be suitable for younger audiences even though it has themes of death and slightly adult jokes. The art style is appealing and the film successfully uses a mix of Asian and European cultures and is set in the fictional city of San Fransokyo, which is a mix of the real cites, San Francisco and Tokyo.

I would certainly recommend this movie to people of any age range, from the youngest to the oldest, there’s something for everyone. It’s available on several streaming services online, making it accessible to all. 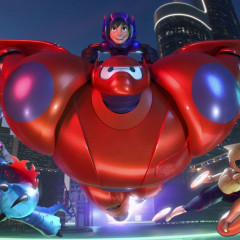 Review of the movie Big Hero 6

East meets West in a fusion of cultures and art with fun times for all.