It's a sense of unapologetic attack and unbridled energy which earned her the name Dynamyte the first time she ever stepped into a recording studio.

It takes someone with knowledge beyond her years to write a song with as much depth and uniqueness as ‘Show Me You’. It’s no surprise, then, that alongside playing all the instruments on the track - and, bizarrely, having a black belt in TaeKwonDo - Dynamyte has a degree in social psychology.

“I use my analyses to make sense of my experiences when I’m writing, while also targeting what kind of content I feel the world needs.” she says, “I always want to write songs that will impact people.”

It was this sense of unapologetic attack and unbridled energy which earned her the name Dynamyte the first time she ever stepped into a recording studio.

‘Show Me You’ is a refreshing breath of air in the world of pop-rock, with unusual lyrical content that will speak to the Tik Tok generation. The song speaks not about love, or sex, but instead the importance of remaining true to yourself and authentic on social media. Set to a neo-soul beat (that Dynamyte herself plays on a kit) and characterised by her sultry-low vocal which smacks of Dua Lipa or perhaps the late, great Amy Winehouse, the song is instantaneously catchy and will immediately have you humming the hook.

It’s an interesting new lyrical direction for this genre of music, leaving Dynamyte’s competitors coughing in her dust. 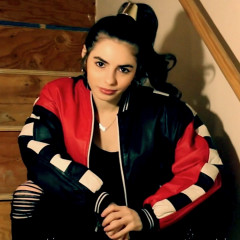 Dynamyte explodes onto the scene with ‘Show Me You’

It's a sense of unapologetic attack and unbridled energy which earned her the name Dynamyte the first time she ever stepped into a recording studio.