Netflix’s Shadow and Bone series takes a beloved YA fantasy book trilogy and deftly introduces the complexities of this world to a new audience, while pushing some cheesy tropes along the way.

Before watching this eight-episode series I had never read author Leigh Bardugo’s Grisha Trilogy books and knew nothing of the story or characters. This is often a challenge for showrunners in charge of adapting beloved book series such as Game of Thrones – on the one hand, they have to please a passionate and demanding fanbase, and on the other they have to make the various complexities of a multi-book series and its many characters and fantasy elements accessible to newcomers.

It took a few episodes of Shadow and Bone for me to fully understand the narrative issues at play. As ever, there’s a main character who discovers she is a ‘Grisha’, meaning she has a magical power and that she’s destined to save the world. This is standard. However, the various geographical locations in the story were harder to wrap my head around and required me to google the map of the Grishaverse several times. Three countries are at war: Shu Han, Fjerda and Ravka. The latter has been split in half by the ‘Shadow Fold’ which is a region of nearly impenetrable darkness that contains pterodactyl-like monsters that eat human flesh. Not so standard.

Aside from the pressures of translating the world-building to screen effectively, the strength of this Netflix adaptation lies in its excellent casting. Jessie Mei Li stars in the leading role as Alina Starkov, and with only a few acting credits behind her, she carries the show well. Ben Barnes is our charismatic main villain General Kirigan, who you may recognise from the Narnia films or Netflix’s cancelled Marvel series The Punisher. Other standouts are the criminal group known as ‘The Crows’, made up of actors Freddy Carter, Amita Suman and Kit Young, whose cheeky rapport with each other makes for a delightful watch.

In a few episodes Shadow and Bone does what Game of Thrones took eight seasons to do: through combining the first and second books of the trilogy in its script, it brings together diverse characters from different regions. At times their meetings seem overly coincidental, but their interactions are undeniably entertaining.

Shadow and Bone is currently Netflix’s most watched series in the UK. There has yet to be an announcement of a renewal for season two, but given its popularity this is only a matter of time.

If you have the attention span to get to grips with the geography and the various warring factions, Shadow and Bone is a fun watch and will sate the appetites of fantasy fans. 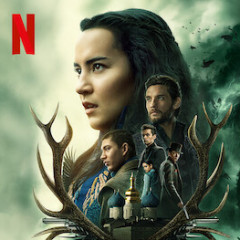 Netflix’s Shadow and Bone series takes a beloved YA fantasy book trilogy and deftly introduces the complexities of this world to a new audience, while pushing some cheesy tropes along the way.