Grease LIVE! is a 2016 remake of the original Grease. It was first performed in 1971 as a Tony award musical but it became popular after becoming a movie-musical in 1978. This version is the latest twist to Danny and Sandy’s story.

Grease Live! Is a musical television adaptation of the 1978 movie Grease. As in the original, it shows the love story between the lovely Sandy and the cocky Danny, who meet during the Summer holidays, only to find out that she has transferred to his school, Rydell High, where most of the story develops.

This newer Grease is performed live with on site audience, which make it really fresh and interesting, but the first thing that caught my attention is that the cast in this version has an ethnic variety that the original Grease didn’t have, I was pleased to see a diverse cast.

The script and songs follow the originals with a modern twist and choreography’s and costumes take you back to the 70’s brilliantly. The show flows smoothly with the camera following the actors around the sets in a way that makes you feel like you were there even though it was recorded A few years ago. Popular singers and well known actors from other movies and musical productions carry the leading roles, but the whole cast does a great job, specially considering that it’s recorded live. It’s worth mentioning the special appearance of Didi Conn, an actress from the original movie.

To finish of my review, I think it is a really fun show to watch either with friends or family with a big bowl of popcorn and ready to have a good time. 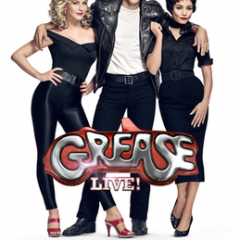 Grease LIVE! is a 2016 remake of the original Grease. It was first performed in 1971 as a Tony award musical but it became popular after becoming a movie-musical in 1978. This version is the latest twist to Danny and Sandy’s story.