Beautifully-written and utterly un-put-downable. Where the Crawdads Sing is a gripping read! By Delia Owens, this debut best-selling novel is a remarkable and powerful tale and left me gasping for more…

Where the Crawdads Sing by Delia Owens is a uniquely vivid and poignant novel that captures the resilience and strength of young female protagonist Kya. The story – set in the marshlands of North Carolina – is a feast of sensory description, and transports the reader deep into the natural world. No wonder it has spent more than 50 weeks in The Sunday Times’ Top Ten for fiction paperbacks.

It is written in 3rd person, flitting between the time of Kya’s child and teenage years and the time of a murder investigation where she is under suspicion. The novel is hard to categorize into one genre because it is a blend of a coming of age, a love story and a murder mystery.

Growing up in the 1950’s and 60’s, Kya battles her way through huge adversity. After being abandoned at just six years old by her family (driven out by an abusive father), she is quickly forced to become self-sufficient. She learns to cook, earn money and hide from outsiders. She becomes totally independent but at a great emotional cost.

The story outlines the importance of social contact with others and how being isolated can change the way we think, and our overall mindset. Many will be able to relate to isolation to a certain extent through lockdown, but Kya’s solitude – from the vulnerable age of 6 – is unthinkable and greater than I can wrap my head around. Her bravery and ability to remain independent is an example of undeniable strength, after being deserted by everyone she has ever known or trusted. As the Guardian describes, “At times, her survival in isolation comes close to superheroism,”.

As well as her struggles with loneliness, society in the main town is inherently cruel and unwelcoming towards Kya, curating rumours of her animalistic traits and unearthly ways. They marginalise Kya – christening her the “Marsh Girl'' – as someone to be wary of. It is astounding how no one reaches out to help her in all her vulnerability, apart of course from Mabel and Jumpin’ who provide her with clothes and some sense of family. The town as a whole, however,  instils their superiority over Kya and makes her feel less than.

The nickname “Marsh Girl” is not totally inaccurate though. The marsh and the creatures who live there become her only comfort and companions for a long time. “Nature had nurtured, tutored and protected her when no one else would.” As the years go by Kya learns of every cog in the great workings of the marsh and knows every detail of her surroundings. Once she has been taught to read by neighbour and love interest Tate, she writes books on the marsh life and becomes an accredited wildlife writer and painter.

Delia Owens is a three time best-selling nonfiction co-author having written books on her time as a wildlife scientist in Africa. Her botanical knowledge and passion for nature is so beautifully illustrated by Kya’s dependence on the natural world and her love of the marshland. Much like the author herself, she grows to connect on a deep level with nature and gathers a wealth of knowledge on the subject.

"I learned from a book that crawdads [crayfish] don't really sing. But I learned from my mother that if you go far enough into the wilderness, by yourself, and there's nothing but you and nature, you will hear the crawdads sing."

There is an element of romanticism amongst the scientific and factual relationship she has with nature – which may sound like a contradictory statement. Kya feels a sense of sublimeness in regards to nature as the romantic poets did too. The poetry she reads is often inspired by the natural world, and she is in awe of the wildlife and nature around her. Owens flips the script on how marshland is often derogatorily thought of as wasteland but actually is a rich and thriving landscape.

Some hard-hitting themes are tackled in this novel. There are twists and turns all the way through. In a disturbing and horrific chapter, Kya becomes a victim of attempted rape, after ending a relationship with local man (and later murder victim) Chase Andrews. She manages to fight him off but is left scarred by his attack and in utter fear of his return. The picturesque location that she lives in certainly doesn’t relate to an idyllic life.

Where the Crawdad’s sing is beautiful, descriptive and a joy to read. Laced with the tension and suspense of a murder mystery – the story is so compelling and engaging. The overall message as well – that to marginalise members of society is cruel and has a huge negative impact – is clear and profound.

It is a wonderful book and I simply can’t wait for the film adaptation to be released, starring Normal People’s Daisy Edgar-Jones as Kya. 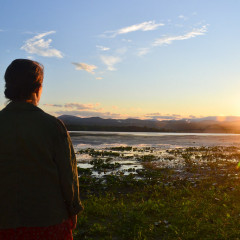 Where the Crawdads Sing Review

Beautifully-written and utterly un-put-downable. Where the Crawdads Sing is a gripping read! By Delia Owens, this debut best-selling novel is a remarkable and powerful tale and left me gasping for more…