I recently watched the film 1917, here are my thoughts on the film overall and some of the techniques used in this film.

Directed and co-written by Sam Mendes, 1917 is an immersive film set in Northern France in the First World War. Two British soldiers are ordered to deliver a message across no man’s land in a race against time to stop an attack that will subsequently save the lives of 1,600 men about to walk into a massacre. Time is the enemy.

This thrilling drama is told in a very unique way as it is seemingly filmed as a long single shot. This captivates its audience and creates a feeling of real intimacy with the characters, you are on the journey with them.

The use of sound is vital in film, it creates rhythm. The use of sound in ‘1917’ kept up the tempo and tension of the film throughout the journey of the two men across no man’s land. Sound is used to emphasise the story, for example the music in ‘1917’ at the beginning is soft however there is an eerie tone to emphasise the struggle that awaits these two young men. As the film progresses so does the intensity of the music. At the very end of the film when it’s all over the music is now soft and slow to accentuate all that the characters have been through and to give a feeling of relief that it’s over.

Roger Deakins, the cinematographer for ‘1917’ used a variety of camera techniques and shots to emphasise the journey of the two young men. The use of the closeup shots to create emotion and intimacy, wide angle shots to emphasise the vastness of the battlefield and low angle shots to highlight the terrain. Considering that it was shot to look like a single take, the camera and the characters were constantly moving so it was like a carefully choreographed dance between the two, which once again heightened the closeness between the audience and the characters.

The majority of editing for this film was done in camera, each shot had to start in a way that it would seamlessly connect with the one before and then end so it connects with the one after. There was no room for error as it wasn’t possible to simply cut a part out if it didn’t work.

‘1917’ is set in the First World War so everything in the frame had to create this feeling. The actors’ costume and the props all had to look like they were from the right era. The makeup illustrated the horrific wounds that the soldiers endured as well as emphasising the extremely tough conditions they were put through. Roger Deakins is a master of using light to create emotion and atmosphere in a scene, and ‘1917’ is no different. Because the camera was constantly moving around the characters, the use of lighting rigs was almost impossible. Therefore, it had to be pretty much all practical light. This could be from: the oil lamps, the flares, the burning buildings, which created a feeling of realness within the story.

This film is an intense, thrilling war drama, but also an immersive, intimate story told through incredible cinematography. Therefore, I think it will appeal to a myriad of people. In my opinion this is like no other war film, it is intimate in a way that I have never seen before. Watching this film has inspired me to watch future work from this Director and 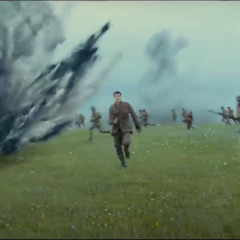 I recently watched the film 1917, here are my thoughts on the film overall and some of the techniques used in this film.