Voice MagArts AwardReviewsGuardians of the Gal…

It kept me really interested – one minute I was happy, then I was sad. It was funny and it was dramatic.

It was happy when Starlord discovered that his Dad was alive. But it turned out that his Dad wanted to destroy the universe, so it was sad because we thought he was a good guy. Then there was a plot twist -  it turned out he had caused Starlord’s Mum to have cancer, which was really sad.

I think the funniest part of the film was the opening when baby Groot was dancing to the music, with the fighting going on in the background. Groot is my favourite character. Even though he only ever says, ‘I am Groot’, his face is really expressive, and the other characters react to him in a funny way. 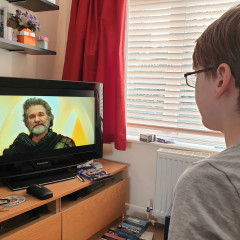 Guardians of the Galaxy Vol 2 - Review