This is a review of the short animation film One Small Step. I will be exploring its use of micro-elements combined with its message to see how effective it was.

I will be reviewing the short animated film One Small Step, a Chinese-American Taiko Studios film directed by Andrew Chesworth and Bobby Pontillas in 2018. It's about a girl, Luna, whose dream is to become an astronaut but who is struggling. However, the death of her father, Chu, completely changes her and helps her evolve as a person, motivating Luna to achieve her dream. 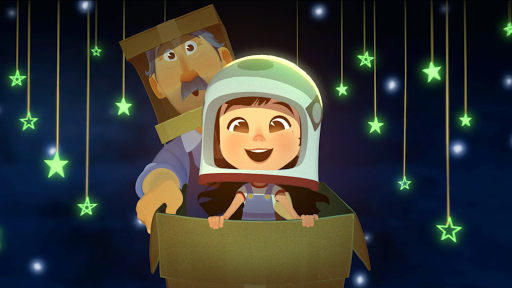 The style and genre of the film are CGI Animation, adventure and coming of age. It follows a linear narrative structure with the foreshadowing of Luna making it to space. It starts with a state of equilibrium, in the form of childhood hopes and dreams and a happy time with her father. However, as Luna gets older, she becomes colder and angered and their relationship becomes distant, this is building tension. Then the conflict comes, and she loses her father. Through her grief, she finds an old box of her shoes that Chu kept, this is the turning point for Luna, it reminds her of her dream. She begins to work hard and eventually makes it to space - the resolution.

The music was by Steve Horner, the light piano and strings create such a beautiful sound and twinkle that is completely reminiscent of our own childhood memories, hopes, and dreams. It reminded me of happier and simple times, so fun and hopeful. Once the film's rising action and conflict arise we are left with no music, just the diegetic sounds of the rain and sad footsteps. It suggests that all hope is lost and Luna is now empty, with her failing dream she feels as if she is no longer herself. Once it gets lighter again, the music reminds us and Luna of the feelings from the start, and it creates a full, emotional circle. It feels like her father is still with us in the music.

I found the cinematography extremely moving and effective. The camera was always still and the characters would often walk onto the frame, reusing the same shots but at a later chronological time. This allows us to see the evolution of the story and the characters, it really does feel like we are just watching their everyday lives. The camera being still suggests that this is a story about life, there's nothing we can do to change or stop what happens, we can only just sit back and watch as everything plays out.

The animation was done by Dason Ao, Andrew Chesworth, Xian Dan, Yukang Liu, Shoafu Zhang. It was a 3D-style animation that seemed to be inspired by the Pixar style of animation, creating a sense of childlike wonder and suggesting a very beautiful but simple story. I believe this use of animaion adds a magical, dreamlike aspect that can't be replicated in live-action cinema.

The continuity editing is very reminiscent of how life moves, it starts at a safe pace during Luna's childhood years, creating a sense of comfort and equilibrium. But during the building tension phase, the editing becomes fast pace and is essentially a montage with harsh, sharp cuts that reflect how difficult life is becoming for Luna and is 'running out of time' because she is unaware of the tragedy that's about to occur. Once her father passes away, there is a fade to suggest his passing and places Luna all alone, but once the turning point occurs, there's a nothing fade to suggest an acceptance and readiness move on but not forget. 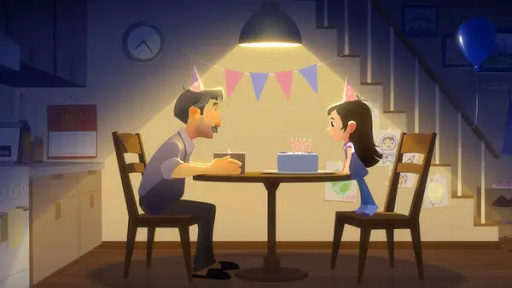 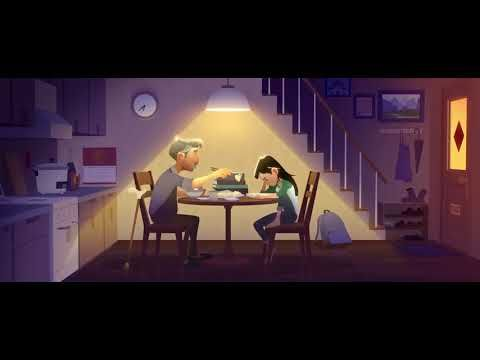 Their home, in the city, starts off brightly lit and cluttered with objects we all find familiar and homely, but as the story progresses, the lighting becomes gradually darker and the house becomes emptier. Until the day Chu passes when the light is off and the house is empty, showing that his life is now over as well as how Luna feels on the inside. The home is the most important place in people's lives, and this film does a brilliant job of reflecting that as if the house was the emotional center of the film because it was. The lighting was done by Gaoshang Zhang (lead), Cheng Guo, Ron Shaw, Kang Wang, and Cimouns Xin. The father is wearing the same outfit throughout, suggesting that no matter what Luna is going through, he will always be her dad and will always be there for her. It also suggests that he has done all his changing and evolving as a human, and his life is, unfortunately, coming to an end, but maybe he was ready for it.

The film would be very appealing to parents and children are given its story and animation style. However, it was created as a film that would work for both US and Chinese audiences. Many Asian Americans were able to relate and connect to the film on an emotional level.

For me, I thought the film had a beautiful story and they presented it in such a moving way. However, I did feel that the end was a bit rushed, which often a problem for short films. It took away from the magic and experience. They made it seem like Luna had no struggles after her revelation which is highly unrealistic. But the rest of the film was beautiful and it did such a great job of gripping me, I became invested in the story very quickly, another reason why I found the ending disappointing.

This film has inspired me to look into more animated short films, I have always been fascinated by how much emotion and depth such a short animation can create as this film is a great example of that. The exploration of Luna and her father's relationship is extremely relatable and hard-hitting so I would love to see more films exploring similar situations.

I would definitely recommend this film because of the way it explores how relationships are incorporated into our everyday lives and how they often change and end in such a cruel way that we can't avoid. I would be able to recommend this film to anyone no matter who they are or how old. 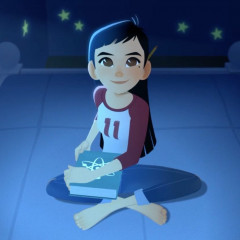 This is a review of the short animation film One Small Step. I will be exploring its use of micro-elements combined with its message to see how effective it was.