This New Creative short explores the meaning of a name, and the deep cultural heritage that is associated with them.

Names are an integral part of our configuration as individuals, and are commonly given to us by our parents as a cue of the past or to solidify a legacy for our future. However, ‘A Flourishing Crown’ presents a recurring reality, the battle of rejecting a name to dissociate from your heritage, and the struggle that allies itself when the name you've been given generates more problems than solutions.

This short, written and directed by Ndrika Anyika allows us to see the dialog between a mother and daughter-in-law. Florence, adopted by white parents at a young age, running from her Black heritage. Folashade, heavily pregnant, and desperate to connect with the very heritage Florence is convinced should be forgotten.

It was beautiful to see these two worlds collide and there were moments of delight shown in the literary choices made by Anyika.  For example, Florence says: “ I was happy that my adoptive mom gave me the name Florence” and “why don’t you name him Steve after his Grandfather.” A strong statement that solidifies this notion that to have a British or traditional western name is desirable, not a cop out.

Another great line was “Would you like some tea?” such a quintessentially British response to conflict and discord. It’s a running theme for people who try to disengage from their roots, choosing the more acceptable resolution which frequently is to ignore them completely. That's how these migrants survived, after all. It took them removing all that they were to survive in a country that would have favoured their omission.

So, although as an audience you look at Florence throughout this short and think how can you confidently renounce your heritage without a glimpse of remorse, it’s imperative to note it comes from a place of protection, not ignorance or shame.

The end scenes make for beautiful viewing, as a bridge forms between these two women, as they gaze at an old black and white photo. This bridge will not only strengthen them as individuals, but as a family, and provides prospective hope for a whole new generation.

Overall these conversations stress the importance of confronting the past and our history, even down to our very names because our names don’t always fit where we are but they do fit who we are. ‘A Flourishing Crown’ buds hope for all who were once ashamed of their heritage – it no longer has to be your story, you can choose to embrace the very thing that makes you different.

We also interviewed Ndrika Anyika, and you can find our discussion here. 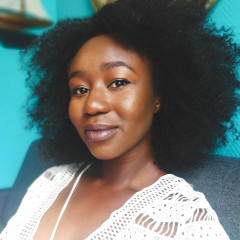 This New Creative short explores the meaning of a name, and the deep cultural heritage that is associated with them.