The cello seems to be having a new lease of life in the contemporary crossover scene. That’s not to say that it was in any sort of endangerment; its position as a solo instrument in the classical scene has never been stronger since Sheku Kenneh-Mason placed it firmly into the spotlight. That said, between ensembles like 2CELLOS making it as big as they have — especially with their rendition of AC/DC’s Thunderstruck — and Wonder Woman’s theme in the Batman v Superman film being composed for electric cello in a metal style, it’s safe to say that contemporary cello is seeing some real love right now. The growing genre is also attracting a lot of virtuoso artists, of whom Peter Hudler can definitely count himself amongst their ranks.

Graduating with a masters and postgraduate degree 2009 from the Mozarteum University (yes, named after that Mozart) in Salzburg, he has performed in major European ensembles and as a soloist across the continent. He very much sells himself as something of a musical polyglot, and his repertoire includes all the classical works you might imagine. Cello on Fire (both the show as seen on theSpaceUK and on his upcoming crowdfunded CD of the same name), whilst dipping into this oft-explored pool of classical and romantic pieces, seems to largely want to explore more contemporary works.

Below is the complete programme of the show:

Cello on Fire is a show that explores the truly vast musical range of the cello as an instrument. It is delivered with not only great virtuosity but an equal helping of emotion and effortless humour. The classical repertoire was played with all the polish and artistry one would expect from a highly classically trained musician, but also with a degree of emotion and interpretative creativity that is so often lacking. The Jazz works were played with an effortless laid-back feel that a lot of classical artists struggle to find. The most technically demanding and frenetic contemporary works like the Henryson or the Hendrix were played with a fierce concentration and intensity, if without the head-banging and foot-stomping you might expect from the 2CELLOS guys.

Particular moments that stuck in my mind were the performance of Dancing for D and Kalimba which both brilliantly showed off Hudler’s truly jaw-dropping pizzicato and slap technique, which is used to create a sound that might remind you more of a cross between guitar and slap bass than something you would associate with a classical instrument. In this way, Cello on Fire is a love-letter to the instrument’s versatility. I was also very impressed by the rendition of Syrinx, although I feel a professional obligation to be angsty about anyone stealing one of my instrument’s most famous pieces! I also loved the inclusion of the A Celtic Cello Set; with fiddle usually monopolising the string niche within that style of music it was fascinating to hear a very different string sound taking the role, especially with the way the cello can occupy the drone role as well as the melody by way of double-stopping.

The recording was done artfully and correctly places the emphasis on the music and the performer rather than doing anything too outlandish with the camerawork, focussing on his face and hands, before returning to the standard position placing him in a minimalistic space with a simple rug and purple background. If I had any criticism here it would be in the editing; much of it was clearly done in iMovie and the usual overflowing of unnecessary text effects and stock transitions abound. These are all just matters of polish though; hardly important. Leaving in a section of tuning the instrument was ill-advised however, and did break up somewhat what was otherwise a very well-paced programme.

Overall then, Cello on Fire was a brilliant production that provides not only a great listening experience and an opportunity to marvel at a very accomplished musician’s virtuosity, but also feels like something of a cello education. There is something new for anyone here to discover, no matter how acquainted or unfamiliar with the instrument they might be, and Hudler shows the instrument off at its best in all the genres he delves into. 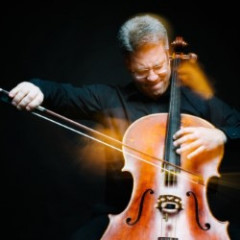