My film review of JoJo Rabbit for the Part B of my Bronze Award.

Over this weekend I watched a critically acclaimed film adapted and directed by Taika Waititi called JoJo Rabbit. The filmmaker (Taika Waititi) has a film style that explores complex characters by challenging their innocence and compassion, while also using witty dialogue that creates overall a light hearted atmosphere. Taika Waititi’s distinct style is very prevalent in JoJo Rabbit.

I thoroughly enjoyed this film because it captured that same child like tone with this style, as the film follows the story of a young lonesome boy (in Nazi Germany who develops a friendship with a Jewish girl hiding in his house). I particularly liked the dialogue in this film because it was the perfect balance between humour and realism. The soundtrack also added the right amount of catharsis at key points and was very fitting to the climactic scenes. I also loved the production and thought the sets were visually immersive and so rich in colour.

The only negatives I feel against the film is that it felt quite confined and I believe it would have been more entertaining if there were more scenes of JoJo playing outside alone or with his mother. I also feel it would have been nice to see more of the relationship between JoJo and his friend Yorki.

Overall, I thoroughly enjoyed the film and thought it was beautifully made. I loved the fact comedy was weaved in and out of scenes while dealing with such a sensitive topic, it reminded me of being a child and having that view of innocence and naivety even in the worst of times. I also watched this film with my father and he quite enjoyed it, however he preferred the second act of the film more than the first. 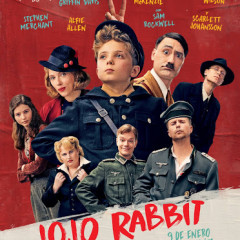 My film review of JoJo Rabbit for the Part B of my Bronze Award.