American rocker Zoe Scott has decided to embrace the genre of bossa nova on her album 'Shades of Love'.

Bossa Nova music was created sixty years ago through blending American Jazz and Brazilian Samba as a way of attracting the opposite sex. American rocker Zoe Scott has decided to embrace the genre with the guidance of producer Moogie Canazio, who is known for his all-analog recording style, to release her debut Bossa Nova album ‘Shades Of Love’.

Opening with ‘Quiet Nights’, the track was originally written by one of the genre’s pioneers Antonio Carlos Jobim. This version of this love song features Jobim’s grandson Daniel on a pleasing acoustic piano and it blends beautifully with Scott’s rich lead vocal.

Then we have the classic ‘I’ll Stand By You’ which was originally made famous by Chrissie Hynde of The Pretenders. Complete with a fluid electric guitar and a calming vocal, this is an interesting Bossa Nova version and is a strong inclusion.

The percussive arrangements are well-thought out with the addition of opulent horns especially on ‘The More I See You’ from the Roman Polanski film ‘Frantic’. The Burt Bacharach compositions including ‘Baby It’s You’ (which was previously recorded by The Beatles and The Shirelles) and his co-write with Hal David ‘This Girl’s In Love With You’ (recorded by Herb Alpert) are stunningly delivered with honeyed vocal.

The track ‘Wave’ is also penned by Jobim and includes Daniel Jobim skilfully scatting in the same vein as his grandfather whilst ‘Triste’ includes smooth backing vocals.

The album closes with ‘You Know I’m No Good’ by the late Amy Winehouse which connects with Zoe Scott on a personally level as she admits that “…like Amy, I had one more lover than I should have. Perhaps afterwards, I regretted all the consequences of the affair.”

Overall, Zoe Scott has connected with the Bossa Nova sound and worked hard to keep the romantic feel whilst putting her own signature vocal on the material and it is a triumphant release which will appeal to fans of the genre. 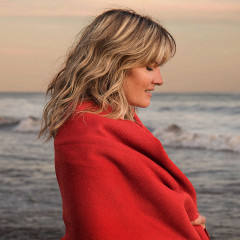 Zoe Scott is pioneering on 'Shades of Love'

American rocker Zoe Scott has decided to embrace the genre of bossa nova on her album 'Shades of Love'.