Australian country duo for KING & COUNTRY are brothers Joel and Luke Smallbone, and they have released the official music video for their take on the Christmas classic ‘Little Drummer Boy’. Taken from their first ever full-length Christmas album ‘A Drummer Boy Christmas’, both album and music video are out now.

The music video begins with a scenic view as they walk through fields with large drums draped around their necks before snow starts falling. Lanterns light up around the trees and a well-dressed boy walks through the dark woodland also carrying a drum (an interesting fact – the boy in question is Luke’s own son!)

Visually, it has a cinematic feel, as the trio move through the American Civil War, as men in full uniforms run around the smoke which covers them.  Then they move through grand structures and the cold outdoors until they reach their destination – a manger with a young baby boy inside.

Fans of for KING & COUNTRY will delight at the Christmas cheer but also the video’s ‘Easter Eggs’ - and you will have to watch the video to find them! The video is filled with vibrant colours, stunning backdrops and easy on the ear lead vocals that would be perfect for radio airplay in the lead up to the 25th December.

To summarise, for KING & COUNTRY have opted to put a spotlight on the feelings associated with the Christmas period such as love, teamwork and family rather than the commercialisation of the holiday season and people across the globe will relate to this message especially when looking back at the year 2020. 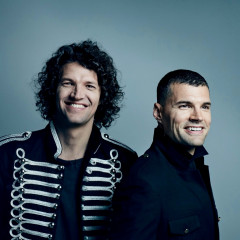