We review the New Creatives short film Apocrypha, and it's very surreal!

Apocrypha, created by New Creative Tamu Nkiwane focuses abstractly on themes of heritage and spirituality. I really liked the weird and experimental tone of this short, although psychedelic is perhaps a more apt way of describing it! Apocrypha is a video version of mixed media artwork, amalgamating a mix of 3D spinning scans, written poetry displayed over videos and photos, and snippets of small talk. It was certainly different, and I’ve definitely never seen anything like it before. I admittedly found it slightly hard to read the poetry at the beginning of the film, but I was still eager to see more of these visually engaging elements.

The use of mood lighting brought a light and mystic atmosphere into parts of the piece, which was supported by the cinematography focussing on one person. The conversation between the two men was interesting and I wanted to know more, as it seemed like the main character was learning from an individual whose face never entered the screen. I was intrigued, but felt like the conversational parts were separate from the rest of the film. I struggled to connect the more experimental part of the film up with the more natural style of the conversation. Choosing one or the other might have allowed more time for exploration within that idea.

I loved how audio was used throughout the film to create an interesting mood, especially at the start. I also thought the effect of having a different audio language on top of the visual language was incredibly effective. It brought to mind ideas of dual identity and cultural heritage, which I really enjoyed!

Apocrypha was an entertaining and exciting piece of experimental film, some of which was successful and some that needed a little more cohesion.

We also interviewed Tamu Nkiwane, and you can read that here. 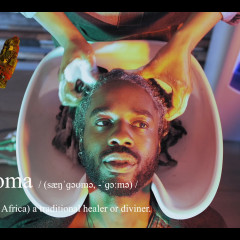 We review the New Creatives short film Apocrypha, and it's very surreal!