Ever wanted to see 30 plays in 1 hour? You’ve come to the right place!

On Saturday evening (26 September), I watched my first ever live (or live with a 30 seconds delay) theatre production from the Degenerate Fox Theatre.

I was intrigued by their seemingly crazy idea of an online show that squeezed 30 plays into one hour and was performed through a Zoom call. Sounds impossible, right? Not for this talented bunch of actors, who have written and produced 30 two-minute plays, and managed to perform them all in under an hour.

Titles such as ‘Bedtime, a non-literal recreation of’ included a hilarious goodnight sequence and ‘Interpretive Dial-Up’ – as the title suggests – included an interpretive dance to the sounds of a phone dialing. I won’t go into any more detail about the content of the plays and let you find out more if you go to see the show, but needless to say they were as side-splitting as they were creative.

Before the show I received a ‘play menu’, which I must admit was slightly confusing, as I didn’t quite get what I was ordering. The menu listed the unconventional titles of the 30 plays with a number next to them but had no context. Once we got into the play, I understood that the audience messaged in chat which play they wanted next, and the play with the most votes was picked and performed.

I think one of the most impressive aspects of this show was the digital magic that made everything run so smoothly that I almost forgot the show was live. Any mistakes seemed to become part of the fun and I really liked how light and goofy everything felt. The actors added so much hilarity to each show and personally, the last show of the night ‘Sensual Dips, or Advertising for Dummies’ was my favorite because of the absolute commitment of the performers. Overall, the show was also able to strike a great balance of being current while also being outrageously funny and not too anxiety-inducing.

Degenerate Fox perform Neo-Futurism, a genre that doesn’t really buy into the suspension of disbelief but has actors playing themselves, talking about real things. Since 2016, the theatre has been making wildly eclectic plays and for the first time this weekend they performed their adapted show online. The Dirty 30 was slightly bonkers but 100% so much fun to watch.

Their next shows are on Friday 23rd and Saturday 24th October 2020 — if you want to have a cry-laugh, definitely book a ticket! 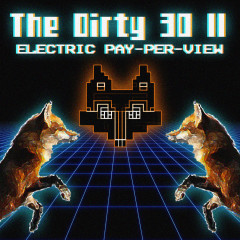 Ever wanted to see 30 plays in 1 hour? You’ve come to the right place!